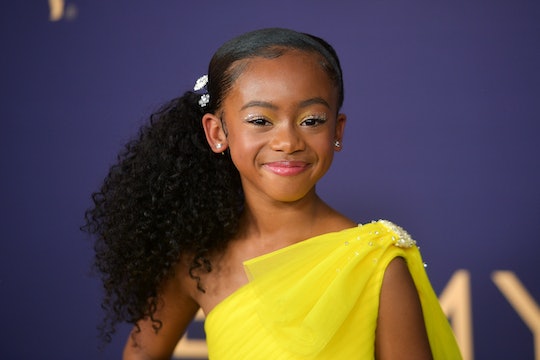 Imagine what it must be like to go to the Emmy Awards in general, but especially as a little kid. It's the kind of spectacle that almost defies the imagination, and the clothing? Come on now, it's incredible. And potentially intimidating for adults and kids alike... except for one stunning little star. This Is Us' Faithe Herman's 2019 Emmys look was all about those princess vibes, and how could you not be happy for her when she is clearly owning the purple carpet?

The 11-year-old actress wore a long yellow one-shouldered dress with a sparkly belt and a side ponytail to the 2019 Emmy Awards, and if you're trying to figure out who she reminds you of with this particular look let me give you a hint: She falls in love with a beast and really loves reading and singing with enchanted household items. That's right, Herman is basically Belle from the 1991 animated film Beauty and the Beast, you remember the dress. The one Belle wears when she and the Beast dance and eat supper and fall in love.

Wearing a similar gown, Herman couldn't be any more luminous if she tried. Of course she is 11 years old, so it's not like she exactly has to try to look luminous. It's called youth and joy and excitement to be part of This Is Us, one of the most beloved ensemble dramas on cable television right now that's been nominated for nine Emmy Awards, eight of which are for acting. No wonder Herman is beaming in her photos.

Herman has been playing Annie Pearson, the youngest member of the drama-plagued Pearson clan, since the series first premiered on NBC in 2016. It's a role that perhaps comes naturally to her since she is the youngest of five children in her own family. When you consider the fact that she is only 11 years old now, that's a pretty long time to be working on the same program. But here's the thing about this talented young actress — she's already been working a long time in the entertainment industry and loving ever minute of it. As she told BuzzFeed News back in January, working as an actress has helped her confidence considerably. "On my first audition, I didn't say anything. Someone said 'How old are you?' and I put up six fingers. But I really got used to it and [now] I have so much fun and really love what I do," she told the news outlet.

As we can all see from the 2019 Emmy Awards, Herman's confidence is without question not an issue for her these days. Beyond her fabulous Emmys look, it makes sense that Herman would be pretty confident at the awards show that's watched by millions of people around the world. It's not exactly her first rodeo here, after all. She was a happy little presence at the 2018 Emmys as well, where she talked about being "really thankful about being on an amazing show."

Clearly Faithe Herman has all the tools to be an Emmy winner. Let's see if that turns out to be true in 2019.