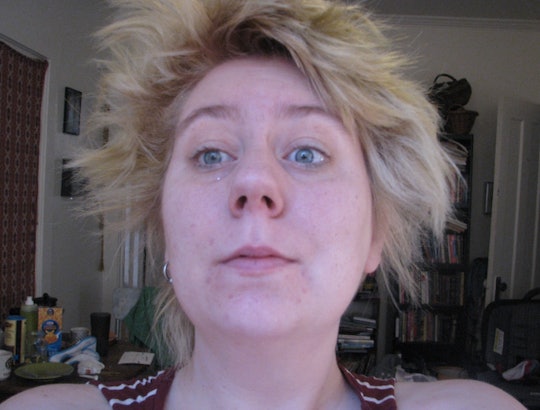 My wife and I had been on the fence about going to our local Pride Parade for days. On the one hand, we’re a queer couple and we have a 1 year old. It seemed like Pride was the kind of thing we ought to share with him. On the other hand, well, the local Pride festival where we live doesn’t exactly feel like an appropriate commemoration of the Stonewall riots, the protests that are often credited with started the modern gay rights movement. Plus, it’s a major pain getting downtown. And like I said, we have a 1 year old, so multiply any logistical difficulties by a thousand. But the morning of Pride, we had more or less decided to get over ourselves and go, for the kid’s sake. Then, I read about the shooting at Pulse nightclub in Orlando, Florida by an armed gunman, and my lukewarm feelings about taking my son to the Pride Parade turned hot — immediately.

I was breastfeeding our son, and checking Twitter on my phone (like the incredible mom that I am) when I read first the news. This was in the morning, and it was before the body count climbed all the way up to 50 people killed and more than 53 injured at Pulse. At that time, the estimate was that “about 20” people had probably been killed, which is less the half the actual number, but still way too many people. I sat there, clutching my child, trying not to cry. I didn’t yet have any words for what I was feeling, but the particular grief you can only feel when your community is attacked was consuming me.

When I told my wife what I'd seen on my phone, I completely broke down. She held onto me and said, “do you still want to go?” in a tone that conveyed clearly that if I wasn’t up for it, if I needed to stay in with my feelings, she would understand and make that happen. It was a sweet gesture, but it wasn’t where I was at. “More than ever in my life.” I told her. And I meant it.

I am not a Floridian, and I do not frequent gay clubs. I want to fully acknowledge that there are many many people who have been more closely and deeply affected by the attack at Pulse nightclub than I have been. I am also not a member of the Latinx queer community, and as such I cannot imagine what people in that community are going through. My heart aches for everyone who lost a loved one, everyone who is waiting to hear if someone they love is OK, and everyone who was there and experienced that fear and witnessed that carnage. There are lives lost — 50 of them — that we cannot get back, and those people deserve to be remembered and mourned. Because of that, my essay isn't filled with pictures of my wife, my child, and me, all smiling at a Pride Parade. I just couldn’t, as the Pulse nightclub victims' names and stories continue roll in and the mourning moans forward, plaster this article with smiles. And my feelings about the shooting, while painful, are as nothing compared to what many others are going through right now.

But I am a queer person, a queer person who has felt the sting of being hated for my “lifestyle” and has tried to ignore that sting so I could live my life. Typically, on a day-to-day basis, I’m able to ignore homophobia and put it more or less out of my mind. It’s what you have to do to get by because you can’t exactly wallow in the knowledge that some people hate you 24/7. And I’m privileged enough to be able to insulate my family from most of the nastier bits of homophobia pretty well, so I get to tune it out. But the Pulse shooting removes that ability. I cannot tune it out. It’s one thing to ignore a bigoted pundit spewing off homophobic nonsense, but when people are literally being gunned down for being gay, it is a different matter entirely. The death and carnage throws it all into stark relief.

I didn’t know what to do, so I packed up my baby and headed off to Pride. It felt weird to think of celebrating at a time like this, but it also felt like the only thing we could do.

What do you do with that sudden awareness of vile, violent, hatred? What do you do when your community is attacked? I didn’t know what to do, so I packed up my baby and headed off to Pride. It felt weird to think of celebrating at a time like this, but it also felt like the only thing we could do. It felt like our community needed to hold each other up, to love each other, and to refuse to let that hatred keep us indoors. This kind of tragedy is something we'll likely never be able to satisfactorily explain to our child, but by going to Pride, we reasoned that we could show him that we refuse to be ashamed of who we are, what we are, and what our family is.

More than just a tragedy, the Orlando attack felt like a reminder that even in 2016, we still deeply need Pride.

My child is barely 1 year old. He doesn’t know what happened and he cannot imagine the horror of the stories I keep hearing. Hell, he doesn’t even know what a gun is. What he does know, though, is that he has two moms who adore him, who always have his back, and that parades are absolutely amazing.

My child is barely 1 year old. He doesn’t know what happened and he cannot imagine the horror of the stories I keep hearing. Hell, he doesn’t even know what a gun is. What he does know, though, is that he has two moms who adore him, who always have his back, and that parades are absolutely amazing. He loved seeing all the bright colors and listening to the music, he waved two rainbow flags in the air with joy and excitement, and he grinned ear to ear when a man in nothing but underwear and glitter put a set of beads around his neck.

I looked the young man in the eye and tried to smile, but my face did something else entirely. I don’t know what he saw and felt in that moment, but I know what it was for me. I felt stronger and also more vulnerable than I have in a long time. I felt the awareness that we are united by struggle and community, and that we can show the next generation how to be strong and brave.

I choked up a little bit, watching everyone go by in all their fanciness. I had never cried at a Pride parade before, but I found that yesterday, on a day of so much sadness, was filled with such a complicated mix of emotions it totally overwhelmed me. I can’t really imagine the kind of strength and bravery must it have taken to wake up to that news, still get dressed up, still dance, and still be proud. How the hell did that young man wake up and put on his undies and glitter, knowing what had happened only hours before? I don't know. But I do know that it's the kind of strength I try to have, the kind I aspire to model for my child.

What do you do when your community is attacked? You grieve, you let yourself feel the pain and the loss and the sadness fully, and sometimes you also go to a parade. Because in the midst of all of this, we need to make space to celebrate the fact that we are still here. And we're not going anywhere.