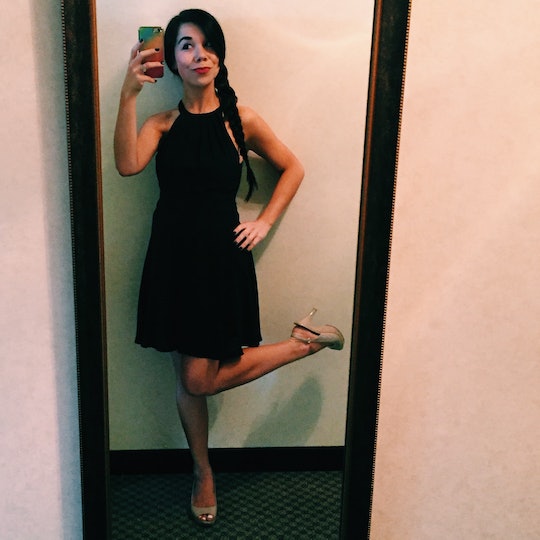 By the time you enter your third trimester, unsolicited advice from acquaintances and strangers becomes about as commonplace as those pesky backaches and Braxton Hicks contractions — meaning, it happens pretty much on a daily basis. It seems as though everywhere we go, pregnant women are approached with friendly tips and suggestions, in the guise of mindless quips during small talk. My latest favorite? (And by favorite, I mean I actually hate it.) The ever-so-popular, “Lol, sleep while you can!” Or its close cousin, "Get ready to never sleep again."

People love to tell pregnant women to “sleep while they can.” It ranks pretty high on the ubiquitous list of comments, right up there with “you look like you’re having twins” and “omg you’re glowing!” On the surface, it seems like sound advice. After all, sleep is pretty important, and newborns can certainly screw with your REM cycle. But let’s be honest: this comment is kiiiiiiind of annoying for a few reasons.

For starters, this is just not how sleep works. It’s not like rollover data from a cell phone plan. If I sleep “extra” hours now, it doesn’t carry over to when my baby is keeping me up later. And I’m assuming that most people probably know this — at least, I hope they do — but it’s still weird all the same.

This is just not how sleep works. It’s not like rollover data from a cell phone plan. If I sleep “extra” hours now, it doesn’t carry over to when my baby is keeping me up later.

More importantly, however, I get the sense that anyone who says this has simply never been pregnant. I’m halfway through my 32nd week, and it’s pretty safe to say that I’m not getting a ton of sleep right now as is. Thanks to the fact that my baby girl is pretty much crushing my bladder, I’m jostled awake every two hours with the overwhelming urge to pee. My heavy bump ensures that I need to gingerly switch sleeping positions multiple times throughout the night for comfort that lasts approximately 45 minutes on each side. Then there's the fact that I snore like Fiona from Shrek these days, which is super-attractive and also makes my husband nudge me on a relatively frequent basis. Or, you know, the fact that my baby decides that 2 a.m. is a great time to start practicing her butterfly stroke. Or my brain decides that 4 a.m. is the perfect time to worry about what I have to do that day for work. Yeah, sleep? It’s not really a thing that’s happening for me at the moment right now.

On the bright side, my body seems to be preparing itself to be woken up at regular intervals throughout the night. I’ll be a total pro by the time I’m required to get up consistently for night feedings and other necessary baby needs.

Look, I know it might seem like pregnant women are just constantly complaining about comments, advice, and other things that are said to them by strangers. But TBH, there’s a lot to whine about. Try to keep in mind that being pregnant is already such a personal, emotional, and sensitive time. We have to deal with everything that’s happening to our bodies while simultaneously dealing with everything going on in our minds. If that wasn't enough, factor in the barrage of unwanted comments and observations from strangers — it’s a lot to handle at once. And when it starts to feel like we can’t step foot outside our homes without being approached about our bellies and the tiny creature growing inside it, it puts us a little on edge.

I know it might seem like pregnant women are just constantly complaining about comments, advice, and other things that are said to them by strangers. But TBH, there’s a lot to whine about.

The bottom line? If there’s any doubt as to whether or not a “joke” might rub someone the wrong way, it’s probably a good idea to refrain from saying it. This applies doubly when you don’t know the person well, or at all. And when it comes to pregnant strangers, the rule should be pretty simple: most observations, comments, and gems of “advice” are best left unsaid. End of story.