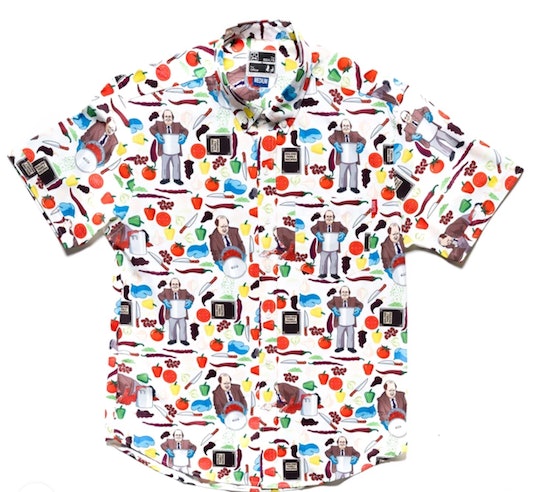 Hello, You Absolutely Know Someone Who Needs This Kevin Malone & His Chili Shirt

If your family or friend group didn't play the "Which character are you?" game after watching The Office, are you even a fan? Back when the show was on weekly, I used to peg my dad as a Michael Scott. The similarities ran deep (and still do) as he managed his own office with his own quirky brand of humor, trying to be everyone's best friend. As my dad has aged, he's morphed into more of a Kevin. Specifically, an "up the night before pressing garlic," chili-pot-spilling Kevin. This The Office themed Kevin's chili shirt is peak dad, and like me, I know you know a dad who needs it.

This short-sleeved button down shirt is made by retailer RSVLTS, and if you don't already love their wacky pop culture designs printed on high-quality clothing, get ready to give them all of your money after a quick spin through their website. It's the ultimate one-stop-shop for fans of wearing clothing with the likeness of Bob Ross, characters from The Sandlot, Kelly Kapowski, and now Kevin Malone from The Office.

The "Kevin's Famous Chili" shirt hilariously boasts a cartoon version of Kevin holding the pot of chili that he notoriously spilled all over the office floor after spending all night painstakingly crafting the concoction from a family recipe "passed down from Malones for generations." The recipe book in question is also featured on the shirt as well, just in case you needed a reminder of how legit Kevin's family recipe actually is. All of the ingredients are there, too — the undercooked onions, the whole tomatoes he diced, the garlic he pressed, and especially the abundance of ancho chiles he toasts himself.

And can we just talk for just a moment about the blue oven mitts? Those ratty, old oven mitts Kevin wears in the parking lot while lovingly describing his chili have a featured role on the shirt as well. Just like any great home chef does, Kevin wears his oven mitts proudly. So proud.

The spilled chili is the opening scene of an episode titled "Casual Friday" where some office members take casual to a whole new level. I'm personally still not over Meredith flashing everyone (because, exactly where are your panties, Meredith?) or Angela complaining about Oscar's toes. That's the stuff The Office is made of. Had Toby not officially cancelled Casual Friday, I'm pretty sure all of the dads there would be sporting a "Kevin's Famous Chili" shirt, possibly even paired with sandals in support of Oscar. Can't you just picture Jim after Cece was born strolling by Kevin's desk wearing this shirt? I'm not sure if it would be more to troll Kevin and his chili skills or to announce his peak dad-status to the entire office, but either way it would be classic Jim.

Kevin spilling his beloved chili is just one of many comedic moments where you watch him on screen and can't help but feel for the guy. When he spills it, he frantically attempts to scoop the chili back into the pot using notebooks and papers. His struggle is quintessential Kevin, but also pretty much sums up the clumsy awkwardness of dads everywhere. So, if you know an awkward dad, this is the shirt for him.

If that dad you know is more of an assistant to the regional manager à la Dwight Schrute, RSVLTS has them covered, too. They can sport a "1000 Ways To Die By Dwight" shirt while going full dad mode telling intensely serious stories about beet farming.

I imagine my own dad rocking one of these shirts when he celebrates his 50th birthday in Las Vegas. He'll proudly waltz up to a blackjack table sporting this collared button-down with Kevin and his spilled chili and start dishing about his family's barbecue recipes and how he spends all night slow-cooking brisket. This shirt is the stuff dad dreams are made of.