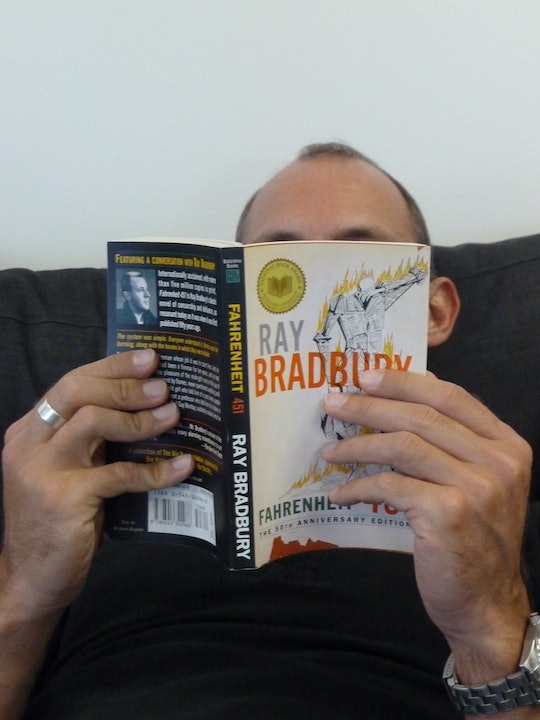 This Kid Needed A Permission Slip To Read 'Fahrenheit 451', & Dad's Response Was Perfect

Congratulations to Ray Bradbury; his book is still getting a decent amount of attention as being "controversial," even 63 years after first being published. Which, considering how many books are out there now with crazy whacky content, it's pretty impressive. Recently a kid needed a permission slip to read Fahrenheit 451, but luckily his dad's response was utterly epic, so it's all good.

Fahrenheit 451, Bradbury's dystopian, cautionary tale of censorship woes, was written in 1953 as his eloquent response to the McCarthy era and the possible threat of book burning to curb dissenters. The book is set in the future, in a place quite similar to the American midwest in the 1950s, when book burning is all the rage. Sure, Fahrenheit 451 does employ a few low-rent swears and talks about drinking and even a little sex (for shame!), but that shouldn't be a big deal in 2016, right? Well, apparently some kids still need to check with their parents before reading it. Daily Show head writer Daniel Radosh was asked to sign a permission slip from his son, Milo, so that he could read Fahrenheit 451 at his school book club. And here was Radosh's amazingly apt response, courtesy of The Daily Dot:

I love this letter! What a wonderful way to introduce students to the theme of Fahrenheit 451 that books are so dangerous that the institutions of society -- schools and parents -- might be willing to team up against children to prevent them from reading one. It's easy enough to read the book and say, 'This is crazy. It could never really happen,' but pretending to present students at the start with what seems like a totally reasonable 'first step' is a really immersive way to teach them how insidious censorship can be I'm sure that when the book club is over and the students realize the true intent of this letter they'll be shocked at how many of them accepted it as an actual permission slip. In addition, Milo's concern that allowing me to add this note will make him stand out as a troublemaker really brings home why most of the characters find it easier to accept the world they live in rather than challenge it. I assured him that his teacher would have his back.

Radosh's amazing response, turning the letter into a "teachable moment" in a funny, cool way (did we mention he is a head writer for The Daily Show?), is exactly the way censorship in the 21st century needs to be shut down, because you can't be serious, right? And while it seems sort of ridiculous to imagine anyone having an issue with Fahrenheit 451 in the internet age, some parents have raised concerns over the "bad language" and such.

In 2006 Alton Verm, a Houston-area parent, filed a "Request for Reconsideration of Instructional Materials" when his 15-year-old daughter Diana brought Fahrenheit 451 to him, concerned about the content. In an interview with The Houston Chronicle, Verm said:

It's just all kinds of filth. The words don't need to be brought out in class. I want to get the book taken out of the class.

Verm has never actually read the book, but he did leaf through it to find the naughty bits. His daughter and another student were allowed to leave class when their teacher discussed the book and were given another book they felt more comfortable with reading.

So no book burning there, which is good, right?