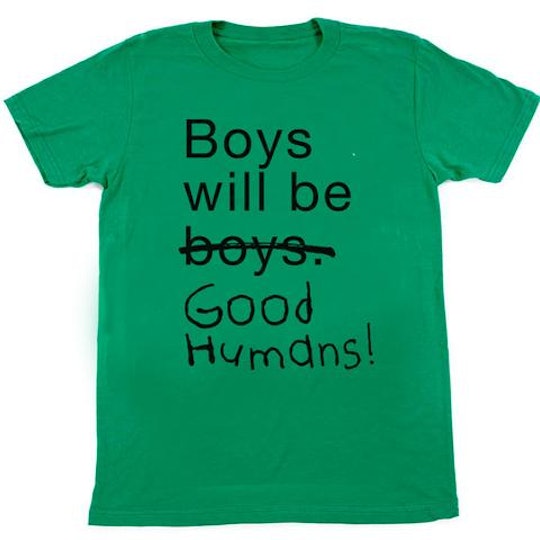 Free To Be Kids

This Kids' Clothing Brand Is Taking A Stand Against Gender Stereotypes

My four sons are all different from each other. Where one might be mercurial and whip smart, another is introspective and funny. Because they are human beings first and foremost, before they're just "boys,' or whatever. They aren't defined by their gender, and also their gender is not defined. We've all seen the t-shirts with divisive statements on them, supposedly tongue-in-cheek nods to the age-old stereotypes about boys and girls. Boys will be boys, et al. They don't help matters. And one kids' clothing brand is taking a stand against gender stereotyping (oh so cleverly masked by the "take a joke!" marketing style) in absolutely the best way. Because boys will be boys just doesn't cut it in the 21st century, guys.

Free To Be Kids, under the direction of designer Courtney Hardman, wants kids to wear t-shirts that speak to the kind of people they could someday be. According to their website, Free To Be Kids "negativity and gender cliches in mainstream kids' clothing with positive messages, slogan tees that flip the script on gender cliches, and stylish, on trend design." Hardman, whose first t-shirt design carried the simple message, "Mr. Nice Guy, was inspired to create gender-positive clothing after she became a mother herself. Fed up with slogans that gave the impression that all boys were "competitive, sports-obsessed troublemakers," Hardman realized, "There was nothing I saw that said my son was a kind and sweet person."

And so, a kids' clothing brand with a positive mission was born.

Free To Be Kids clothing carries shirts for boys, girls, infants, and (oh my God, yes) even grown-up ladies. The boys' t-shirts have messages like Love is My Super Power, I'm A Cat Guy, Kind Like Daddy, and my personal favorite, Being Yourself Is So Punk Rock.

Parents who want in on the action can even get matching t-shirts with powerful messages, including "Nevertheless She Persisted." Or you can even pick up a shirt that reads, "I Love My Thighs." Because all kinds of yes right there.

Happily, there are several kids' clothing brands that are bucking the old-fashioned, dusty trend of pigeon-holing children by their gender. Hartman has another clothing company, Jessy & Jack, designed to offer adorable, gender neutral clothing for infants. Then there's the clothing brand, Princess Awesome, which runs on the fundamental belief that "wanting to wear tutus does not mean you can't grow up to be a rocket scientist," as founder Rebecca Melsky told The Atlantic. Carrying math, shark, and dinosaur-inspired dresses, the Princess Awesome slogan reads:

Because girls are awesome and girls get to decide what it means to be girly.

Trying to understand the sort of person you are as you're growing up is hard enough, right? It's time to stop letting kids' t-shirts decide for them before they even get a chance.