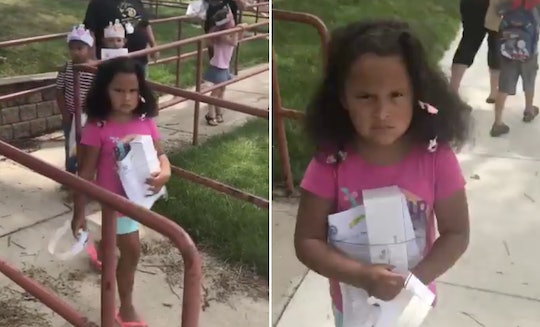 School is just weeks away from starting again, and as ever people are of two minds about it. First of all, parents tend to be pretty excited about getting back into a routine after trying to keep kids entertained and engaged all summer. By the beginning of August, it gets tougher and tougher to figure out creative things to do as a family that won't make you want to scream or just collapse from exhaustion. But not all kids are pumped to get back to learning. Like this little girl, for instance. This kid's reaction to the first day of kindergarten is probably every kid on some level.

A Twitter user posted a video on Wednesday of her daughter coming out of school on her first day of kindergarten. Honestly, I wish I got to go to this kid's school; everyone is wearing a paper crown and high-fiving the teacher on their way out and merrily skipping towards their parents. It doesn't look half bad to me.... but it definitely wasn't sitting well with at least one little girl named Brielle. As the kid in front of her set off to skipping away, she was full on eyeballing her mom, who captioned the video, "How my daughter feels about starting kindergarten."

Spoiler alert; I don't think she loved it.

In the video the little girl is waiting in line with her classmates to be released to her mom, her little paper crown askew and a scowl on her face. The scowl only gets worse as she approaches her mom who greets her with a sweet little "Hi!" Brielle is not impressed, takes off her crown and throws it at her mother. Was her mom mad? Nope. As she pointed out in a tweet, she feels the same way when she has to go to work, so it's all good.

My heart really goes out to this kid. If she doesn't like kindergarten the kid has a long road ahead of her because kindergarten is basically as good as it gets. All of that delightful cutting and pasting, designated snack times and recess... I would literally pay real life dollars to just go to kindergarten as an adult.

Although that being said, this little girl isn't the only kid out there who has struggled with the concept of going to school. Remember that little boy who cried on camera on his first day of school?

In 2015 KTLA reporter Courtney Friel interviewed 4-year-old Andrew Macias on his first day of kindergarten at City Terrace Elementary School in East Los Angeles. Everything seemed fine until she asked him if he was going to miss his mom while in school. He said no, but then it was like it hit him that he wouldn't see her while he was at school. Then he put his hands over his face and started bawling.

I guess it's easy for adults to look back and remember kindergarten as this glorious, sunshiney time where everything was easy and fun. But that's probably because we are now living in a world with real responsibilities, household chores, and jobs and stuff. For little kids, kindergarten is maybe the first time someone outside their family is bossing them around and trying to teach them things they probably don't care about.

I've totally changed my mind here; no wonder these kids are stressed out about kindergarten. This is their first foray into years of sitting in a classroom learning things. Before this, most of them were probably just having a grand old time getting their parents to entertain them all summer.

I might throw my paper crown in a fit too.