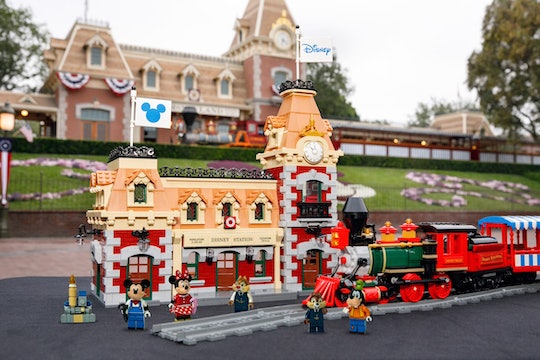 If your family loves taking magical trips to Disneyland, you absolutely need to commemorate the memories you are making by snagging this brand new LEGO set featuring a Disney parks icon. The Disney Train and Station LEGO set is sure to please kids and adults alike with its stunning motorized steam-style locomotive and track, and brick-built replica of a Disney Parks train station. Basically? It's pure magic in tiny brick form.

The set includes 2,925 pieces that allow families to build a replica of the iconic train station that welcomes visitors to Disneyland in Anaheim, California. If you have ever stepped foot into any Disney park, you know how overwhelmingly enchanting the experience can be. Steeped in historical architecture, each building in the entrance to the park will transport you to another time, and the train station is no exception.

Five of your favorite Disney pals are immortalized into LEGO mini-figures in this set. Mickey Mouse, dressed in traditional conductor garb, leads the pack, which includes Minnie Mouse and Goofy who can ride in the train's passenger car or enjoy a trip in the parlor car. Chip and Dale (who are two of my personal fav classic Disney characters) are also included in the set, and are dressed in their most dapper suits to fit in adorably well with the traditional vibe of the train and station set.

While the set is intended for use by kids ages 12 and up, once built, even younger kids can enjoy playing with the Disney mini-figures within the interior of the train station or inside of the four included train cars that feature breakaway exterior walls for easy access to the treasures contained within. A teapot and cup, wall clock, armchairs, and a chandelier are just a few of the clever details LEGO has included in this marvelous Disney set.

Although the plethora of details inside the train cars and station are as charming as can be, the best part of this set is that the locomotive actually works. That's right, you not only get to build and admire this Disney landmark, but the train can be run by LEGO Powered Up technology that you can control from a smartphone or tablet. Bluetooth technology and a motor built right into the locomotive allow you to operate it remotely, and will pull the train cars that connect easily via magnetic couplings around the included 20-piece track.

Using your smart device app connection, you can move the train forward and backward across 16 curved pieces and four straight pieces of connecting train tracks, as well as control the realistic sound effects that the train can emit. Incredible details on the locomotive include a smoke stack, large red fender, and red wheels with working coupling rods.

As you drive the train into the station topped with Disney flags flying proudly atop the gorgeous roof, your kids can play with their minifigures at the ticket counter or in the interior cafe corner where they can enjoy brick-built features like draped windows and discover a LEGO Disney surprise in the tower room. Although no details have been released on what the surprise might be, Disney rarely disappoints on the surprise front, and if the level of detail in this LEGO set is any indication of how amazing this surprise might be, it is sure to be just delightful.

The price point is fairly high at $330 for the set, but with so much Disney magic included, your family can enjoy this commemorative set for years to come. LEGO is slated to release the Disney Train and Station for sale on Sept. 1, but if you are a LEGO VIP member, you can gain early access to purchase the set starting Aug. 21. For more information on becoming a LEGO VIP, you can visit the LEGO website and learn all about their rewards program, where customers earns points with each LEGO purchase.