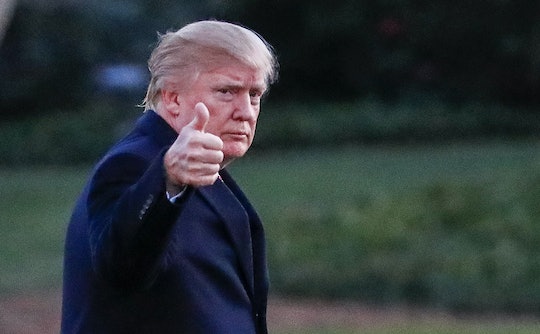 It's no exaggeration to say that President Donald Trump ran a presidential campaign like no other. His primary strategy arguably appeared to consist of making one outrageous comment after another, but it worked better than anyone expected: despite being behind in the polls, Trump scored a remarkable victory on election night. As President, Trump has continued to court controversy through his comments — not to mention his wave of executive orders, according to CNN — but Trump's high-profile decisions aren't the only ones being made. This list of bills introduced to the House under Trump might not be as interesting, but it's something all Americans should be aware of.

What might not always be clear amidst the online chatter is that, throughout the headline-grabbing comments and tweets, the GOP has been working to introduce plenty of new legislation. It's no secret of course — many of the bills that have emerged from the White House since January have been covered by the news media — but between an article about H.R. 861 and one about Kellyanne Conway pulling the Bowling Green Massacre out of thin air, the latter seems far more interesting. What that means though, is that Americans — both those who are for and who are against Trump — may not know exactly how the country's laws may be about to change, and in ways they may not like.

Here are some of the bills that Trump has sent to the House that have gone relatively unacknowledged while he's been tweeting about wiretapping allegations.

Termination Of The Environmental Protection Agency

On Feb. 3 — the same day that President Trump tweeted out an insult about Arnold Schwarzenegger — the House of Representatives introduced H.R. 861, a bill meant to terminate the Environmental Protection Agency. Created by President Richard Nixon in 1970 to address growing pollution issues in American cities, the EPA now oversees issues like protecting waterways, and cutting carbon emissions, according to Newsweek. But in a speech at the Conservative Political Action Conference, Trump's EPA administrator Scott Pruitt said that the EPA's focus on climate change had "cost jobs and prevented economic growth." His plan? To "roll back" EPA regulations "in a very aggressive way."

Termination Of The Department Of Education

A few days later, on Feb. 7, Kentucky Rep. Thomas Massie introduced H.R. 899, a bill designed to terminate the Department of Education by the end of 2018, to Congress. According to The Hill, the bill is based on Massie's belief that education policy should be up to local and state lawmakers, not the federal government. That was a sentiment shared by Education Secretary Betsy DeVos, who responded to a number of questions about policy — including whether schools should be gun-free zones, or whether schools receiving federal funding should be required to protect the rights of students with disabilities — by saying that it was a matter best left up to the states to decide, according to The Washington Post.

On Feb. 1, while Trump tweeted about whether his controversial executive action on immigration was a "ban," Iowa Rep. Steve King introduced H.R. 785 to the House, a bill that would "preserve and protect the free choice of individual employees to form, join, or assist labor organizations, or to refrain from such activities." That might sound nice, but what King was really advocating was a national "right-to-work" act, which would likely have a negative effect on wages and labor standards for American workers.

According to ThinkProgress, right-to-work laws — which are already in existence in 27 states — essentially make union dues voluntary among union employees. On the surface, that seems like a good deal for unionized workers — why pay union dues if you don't have to? — but ultimately right-to-work laws cripple unions' abilities to protect workers and push for higher wages and better working conditions by taking away a significant source of their revenue. In right-to-work states, union jobs are much harder to come by than in non-right-to-work states, meaning that fewer employees will have the opportunity to benefit from collective bargaining (which helps to ensure fair wages), or to have recourse in cases where they have been treated unfairly by their employer.

But that's not all: research has shown that, regardless of whether an employee is unionized or not, just living in a right-to-work state in the first place means that employees' wages are 3.1 percent lower on average than those in non-right-to-work states as of 2012, according to the Economic Policy Institute. And the decline of unions contributes to greater income inequality, with most income gains ending up in the pockets of the wealthiest individuals.

H.R. 586, otherwise known as The Sanctity of Human Life Act, was introduced on Jan. 17 by Georgia Rep. Jody Hice. Its goal? To declare that "each human life begins with fertilization, cloning, or its equivalent," and that "the right to life guaranteed by the Constitution is vested in each human." That's a big deal for anti-abortion advocates, because it would offer legal protection to fertilized eggs that haven't even implanted inside a woman's uterus (meaning the egg is considered a person before doctors even consider the woman pregnant), essentially outlawing abortion.

But that's not all it would do. H.R. 586 would likely have a significant effect on reproductive technology — specifically IVF — as it would be considered as putting the life of the embryo at risk. And since IVF often results in a number of unused embryos, discarding them would also be considered illegal.

Of course, these bills are only a few of the total number of bills that have been introduced to the House so far, and many bills fail to actually make it into law. But they're also the kind of news items that can be easy to miss, especially when you have a President who is so polarizing and unfiltered, which is why paying attention has to be a priority. The bills being put forth all have the potential to enact policies that will affect Americans, but voters can still influence the success of these bills by calling their representatives and letting their voices be heard. It might not be as interesting to read about bills as it is to read about the latest alleged Trump scandal, but it's still really important to do so.