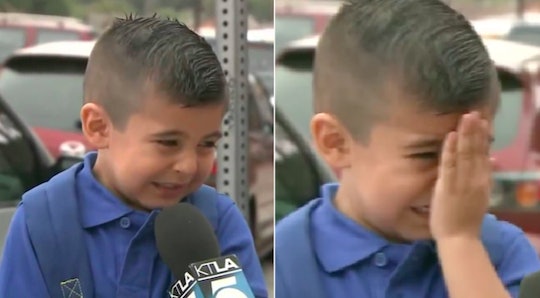 This Little Boy's Viral Interview Was So Sweet, He Did It Again 2 Years Later

First days of school are tough on most kids, but one little boy in particular had a rather famously tough time. Two years ago, a reporter spoke to a four-year-old boy about his first day of school. She asked him if he would miss his mom, and he insisted he wouldn't miss her. He laughed. Held strong for about three seconds, and then burst into tears. Now that little boy from the viral video is back two years later, and he's still just as sweet as ever.

Andrew Macias of Los Angeles was being interviewed by KTLA reporter Courtney Friel two years ago, as a four-year-old starting his first day of preschool at City Terrace Elementary School. The interview started off well enough, Friel was friendly and charming as she crouched in front of little Andrew to ask him questions. But the mention of being away from his mom turned the interview south in a flash. The interview went crazy viral on social media after it was shared on KTLA's Facebook page, viewed more than 70 million times, parodied and used as a meme; it was even used as a commercial for eBay. Poor Friel, who obviously felt terrible when Andrew cried, took a whole lot of flak for upsetting a child on his first day of school.

The classic pairing of Friel and Macias are back at it to set the record straight. Andrew is now six-years-old and ready for his second closeup. For her part, Friel wanted fans to understand that Andrew's mom Patricia was standing just off camera during the first interview, and she's not a monster who takes pleasure in making small children cry. Also for the record; Andrew's mom was quick to comfort him immediately. All's well that ends well.

These days, Andrew is still shy. He's still sweet (although this time around, when Friel asked him if he was going to miss his mom when he goes off to first grade, he answered with a firm, "Yes"). But he's also well aware that he's become internet famous, which everyone knows is the best kind of famous. His mom Patricia told Friel that her son gets recognized all the time, and Andrew has noticed:

Andrew is one lucky kid. He gets to start first grade internet famous, with two interviews under his belt. Although on the flip side of that coin; once you're a meme, where do you go from there?