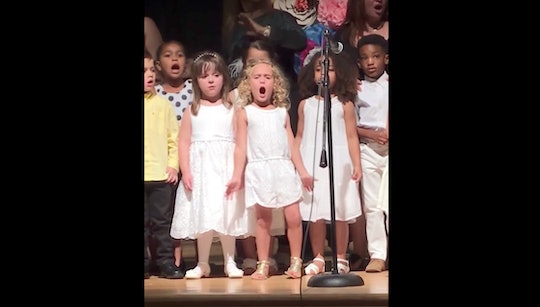 Graduations are notoriously emotional for everyone. Parents are watching helplessly as their kid enters a new stage of their life. And the graduates? Well, they're just waiting to find out how far they'll go. No matter the age, whether they're graduating from high school, university, or even kindergarten, things can get sentimental right quick. Take this little girl singing "How Far I'll Go" from Moana, for instance. Sure, she might only be 4 years old. She might only be graduating from pre-kindergarten, which is pretty straightforward, if memory serves. But she gets that she's probably starting on a path to something major, and she totally owns it.

Four-year-old Sophia Urquijo from Florida was part of a pre-kindergarten graduating class tasked with singing a "mellow" version of "How Far I'll Go" from Disney's Moana, according to her mom, Michelle Neshin. Most of the kids in the class did what 4-year-old kids who find themselves in the spotlight tend to do: sway a little, look a bit shell-shocked, or wave at their parents. Sophia, on the other hand, brought it on home. Front and center in the crowd, she belted out the lyrics with so much passion I started wondering just how far she would go myself.

Sophia's mom, Michelle Neshin, shared the video on Facebook where it went crazy viral; As of Tuesday it had been viewed 13 million times and counting. Probably because it's nearly the end of the school year, parents and kids are getting emotional, and everyone can low-key relate to Sophia's out-sized performance.

Neshin told ABC News that her daughter has always had a big personality (clearly):

She has a huge, huge personality. She’s usually spunky and has a corky personality but that was something else even for her. And right before the graduation when it was just about time to walk, she said, ‘I don’t want to do it. I’m so scared. There’s so many people in the audience.’ On the way there she was super excited but when she lined up to get her diploma she was in tears. But she quickly got over that.

So here is the lesson Sophie is teaching us, guys: Every single graduation is worth a splashy, tear-filled reaction. Even when it's pre-kindergarten. Every stage of our lives deserves a moment. Because there are no small graduations, no meaningless stages. It's all worth celebrating.

So the next time you get a promotion at work, I hope you take a page out of Sophie's book and celebrate the occasion with a little "How Far I'll Go." Your boss will love it, trust me.