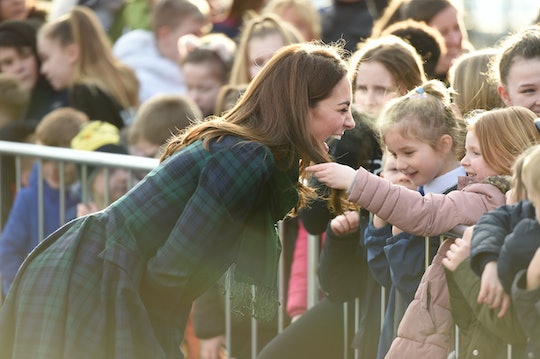 I'm not generally someone who gets into the whole envy business because it's gross and sort of the antithesis of what we women are supposed to be about. Building each other up, taking pride in each other. Not competing or getting jealous if someone has something we think might be better than what we have. However, this rule obviously does not apply to Kate Middleton's hair. I reserve the right to envy her hair. So when I saw this little girl touching Kate Middleton's perfect hair I understood her look of awe. I, too, would be overwhelmed in the company of such an amazing blowout.

The mother of three and her husband, who are known as the Earl and Countess of Strathearn in Scotland, visited the Scottish town of Dundee on Tuesday. As always, the couple spent hours touring different sites of the city, which they previously visited in 2015, checking in at the V&A Museum and meeting local workers in the afternoon. And, naturally, walking in the winter cold to greet their adoring fans, one of whom got a lot closer to Middleton than might usually happen. This young royal fan reached out to touch Middleton's trademark hair... and the seasoned mom didn't seem concerned in the least.

As you can see in the video, this little girl took full advantage of getting close to Middleton's trademark locks. She didn't just swoop in for a quick pat and move on. Oh no, this brave girl played with Middleton's hair while the two shared a quiet chat. Middleton's reaction? She just laughed. Although I struggle to believe that her reaction would be the same if any of us adults, who do not benefit from being adorable children, tried to snake our hands out to touch her wondrous mane.

Admittedly, she is a mother of three kids herself and is obviously pretty accustomed to 5-year-old Prince George, 3-year-old Princess Charlotte, and 9-month-old Prince Louis getting their hands in her hair.

Prince George was especially fond of chewing on his mother's hair when he was a baby.

Now before you go thinking that Kate Middleton is all conceited and vain about her hair you need to give your head a shake and think again. Because last year Middleton secretly donated more than seven inches of her hair to a children's cancer charity called Little Princess Trust, where it was made into wigs for children going through chemotherapy. And as if that wasn't sweet enough, donating her luscious locks was apparently her idea, as per People magazine.

Middleton isn't all about just looking good, clearly. As she more than proved when that little girl in Dundee was playing with her hair, she is actually a lovely person who feels a deep connection with children in particular. Because not everyone in the world would be alright with a child playing with their hair, after all. But that's just Kate Middleton for you, isn't it? More than just a wonderful mane of hair.