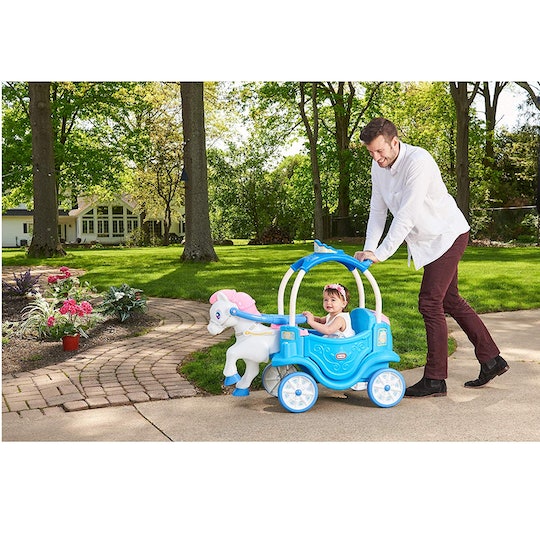 Now that you've scored that new Nespresso machine, are you perhaps looking to add something with a bit more, oh, fairytale magic to your Prime Day? Well then, might I suggest this hilarious and adorable Little Tikes Princess Horse & Carriage ride-on toy? This little beauty is being launched today, but in keeping with its royal nature, it's not available to the roiling masses... only Prime members can snag this one.

To be fair, there is a pink-and-purple version of this carriage available already. And if that's your color scheme of choice, you can hit up Walmart or a number of other retailers. But if the frosty blue color of so many Cinderella-themed fantasies is your thing, then you'll be glad you waited for this new take on the original. Your own little prince or princess is sure to dazzle everyone from the next-door neighbor to local dogs with this toddler-sized horse and carriage. This fancy bit of prancing can be pushed from the handle on top, or pulled forward by the reins. Or, if your little empowered princess prefers to be self-sufficient as she gallops her way to the ball (or the next Woman's March, whatever she's feeling), the carriage comes with a removable floorboard so she can propel herself with her own regal tootsies.

It even has its own cup holder, so your little Cinderella can stay hydrated or munch Cheerios as she surveys her kingdom. The only way this thing could be any cuter would be if it made an actual horse clopping sound. Well, never you fear, it actually does that too!

Or... if your child is more a Pride and Prejudice fan (and what child isn't, I ask you?) you can pull her along while she shouts Jane Austen quotes at the UPS man. Such as: "I am the happiest creature in the world. Perhaps other people have said so before, but not one with such justice." And truly, she likely will be the happiest kid on the block rolling around in this pink and blue bit of whimsy.

Really, the only downside I can see is that the weight limit is a mere 50 pounds. Which sadly means I cannot squeeze my own big body into it and then make my husband pull me to the wine store whilst I do a prim, queenly wave.

It's no surprise that this genius ride-on comes to us courtesy of Little Tikes; after all, the company is responsible for the iconic red-and-yellow "Cozy Coupe" that's been a part of so many children's lives for generations. (How iconic? Iconic enough that two adult brothers in the U.K. constructed a real, adult-sized version of the Cozy Coupe in 2015, reported Metro. Ah, what people won't do for the sake of nostalgia.)

To recap: This ridiculously cute ride-on toy from Little Tikes makes its own horse-clopping sound, has a carriage door that opens and closes, can be pushed or pulled by the reins, and has a removable floorboard. It's sure to be royal treat toy for any kid who loves a bit of fancy prance-y make-believe. And one last thing: It's probably safe to say this one is gonna sell out fast, so don't think this purchase over for too long (you know you'll end up buying it anyway).