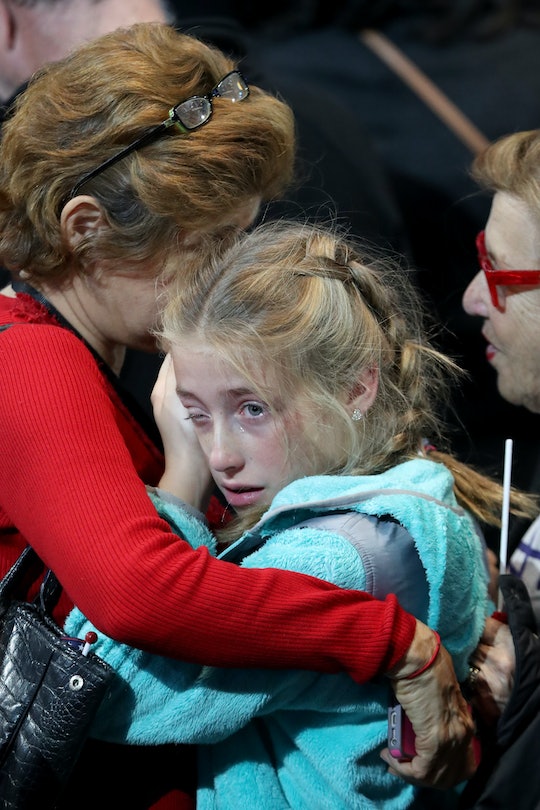 Nov. 8 will go down in history as potentially the most shocking presidential elections the United States has ever witnessed. Despite a rocky election, most political pundits (and indeed, most polls) favored a win by Democratic presidential nominee Hillary Clinton. But it was not to be. After a decidedly divisive campaign marked by personal attacks and scandal, GOP presidential nominee Donald Trump reigned triumphant in polls across the country on Tuesday. But for those voters feeling disheartened, there is hope; take a look at this map of how people 18 to 25 voted and feel glad-hearted about the country's future. All is not lost.

There was much concern about how the all-important millennials would vote during the 2016 general election, particularly after Vermont Sen. Bernie Sanders was defeated in the Democratic primaries. Political pundits worried that the young voters who were so impassioned by Sanders and their "Feel The Bern" grassroots movement were too disillusioned to bother with voting at all. Even Sanders himself, after conceding the Democratic nomination, worried that his loyal following would vote for a third-party candidate over Clinton. According to The Washington Post, at a campaign rally for Clinton in September, Sanders told the crowd:

This is not the time for a protest vote, in terms of a presidential campaign. I ran as a third-party candidate. When we're talking about president of the United States, in my own personal view, this is not time for a protest vote. This is time to elect Hillary Clinton and then work after the election to mobilize millions of people to make sure she can be the most progressive president she can be.

And it appears as though the millennials were listening to Sanders all along. In late October, a Survey Monkey poll of more than 30,000 millenial voters showed nearly the entire country lighting up blue. If only these 30,000 voters were representative of what would happen on Tuesday evening...

While some of the exit poll statistics were disheartening (one CNN poll found that 63 percent of American white males voted for Trump while only 31 percent voted for Clinton), the fact that Clinton would have been backed by 55 percent of voters under the age of 29, male and female, is cause for a small celebration.

So what does this turn-around by young voters, many of whom were either considering third party voting or abstaining altogether, tell us? It tells us that the under-30 set are intelligent and hopeful. It's also proof positive that they do their research; while Libertarian candidate Gary Johnson was faring well with the millennials for some time, he went down in their esteem when he didn't know what the beleaguered Syrian city of Aleppo was. Young voters are concerning themselves with the world beyond the borders, with education, with climate change, and with the future in general. And they are fully engaged. They're not going anywhere.

The future might seem bleak right now, but have hope. Millenials are on it. And they're not giving up.

A previous version of this article noted that this map represented how millennials voted this year. It has been updated with the correct information.

More Like This
You Can ~*Sashay Away*~ With Your Very Own Fisher-Price Little People RuPaul Collector Set
What Is Monkeypox & Should You Be Worried? Here’s What You Need To Know
Here’s What Sam’s Club’s Memorial Day Store Hours Look Like This Year
Here’s What Time You Can Expect BJ’s To Open & Close On Memorial Day