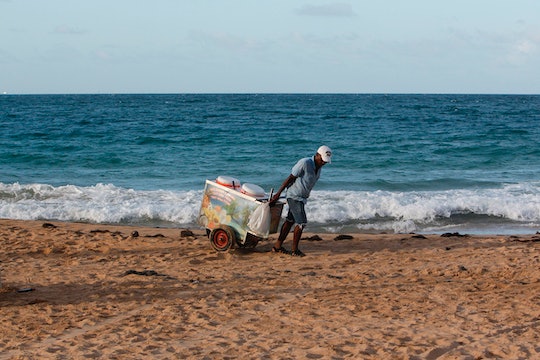 Hurricane Maria, the latest of four major storms — Hurricane Irma, Hurricane Harvey, and Hurricane Jose made landfall just weeks prior — to power through the Atlantic Ocean in the past month, has already wreaked havoc on the Caribbean islands of Dominica and Guadeloupe, where at least one person has been killed and more have been reported missing, according to the BBC. The storm appeared to weaken as it left the island of Dominica (which remains left without power or communications), and was reportedly classified as a Category 4 storm. But it seems to have regained strength, and is now projected to pass through the U.S Virgin Islands on Tuesday before making landfall in Puerto Rico on Wednesday.

The National Hurricane Center, which has been tracking the storm, noted on Tuesday:

On the forecast track, the eye of Maria will move over the northeastern Caribbean Sea today, and approach the Virgin Islands and Puerto Rico tonight and Wednesday.

A map of the hurricane shows the dangerous eye of the storm passing over St. Croix on Tuesday afternoon.

The National Weather Service based in San Juan, Puerto Rico has warned that the storm has the potential to be catastrophic, with winds up to 165 mph and the possibility of "life-threatening rainfall flooding having possible devastating impacts." Puerto Rico Gov. Ricardo Rosselló has asked the island's 3.5 million residents to take shelter over the next few days as the isalnd braces for impact with Hurricane Maria, according to CNN, especially because emergency workers "will not be available to help you once the winds reach 50 mph." Rosselló went on to say on Tuesday:

No generation has seen a hurricane like this since San Felipe II in 1928. This is an unprecedented atmospheric system. We need to keep in mind that we must also protect the lives of these first responders. It's time to act and look for a safe place if you live in flood-prone areas or in wooden or vulnerable structures.

As Hurricane Maria appears to set course for landfall in Puerto Rico, several islands in the Caribbean remain under the threat of a hurricane warning; according to The Weather Channel, hurricane warnings remain in effect for:

A hurricane watch is in effect for the islands of Saba, St. Eustatius, St. Maarten, St. Martin, St. Barthelemy, Anguilla and from Isla Saona to Cabo Engano in the Dominican Republic.

The people of Puerto Rico must be bracing themselves for the eye of Hurricane Maria to make landfall on Wednesday. After Hurricane Irma narrowly skirted around the island's north end two weeks ago, the reality is that Hurricane Maria could be much more catastrophic for the island than what they had previously experienced.

Here's hoping the people living in the potential path of Hurricane Maria can find safety, family, and shelter to wait out what will hopefully be the end of these massive Category 5 storms.