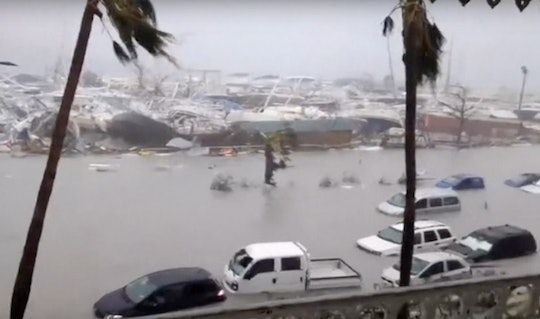 Hurricane Irma has made landfall across several Caribbean islands, leaving a path of near unimaginable destruction as the strongest storm ever recorded churns across the Atlantic. This map of the Caribbean islands Irma hit shows where devastation is the worst, but the storm is far from over and has its sights set on Puerto Rico. Hurricane Irma made first landfall over the islands of Antigua and Barbuda in the early morning hours of Wednesday, where all contact with the island of Barbuda cut out abruptly at 12:30 a.m. Atlantic Time.

From there, the islands of St. Barthélemy and St. Martin took direct hits; according to The Independent, Hurricane Irma was so powerful as it crossed St. Barts that it destroyed the island's only weather station. In St. Martin, some of the the island's sturdiest structures have been completely destroyed by Irma, according to The Guardian. Meanwhile, the British territory of Anguilla also took a beating from Irma, just north of St. Martin. As the sun rose, photos from Hurricane Irma's devastation across these tiny islands in the Caribbean revealed the path of this unrelenting monster of a storm.

The map of the the islands hit by Irma not only show just how small the affected islands are, but just how many more islands are potentially in the path of the storm.

To get a sense of the scale and size of Hurricane Irma in comparison to these Caribbean islands, this GIF from Météo-France's radar is terrifying. You can see how Hurricane Irma basically chews up and spits out the islands of Antigua, Barbuda, St. Barts, St. Martin, and Anguilla.

Of course, radar only shows a computer-generated image based on reflectivity. To see the real deal, we have to turn our eyes to the skies: NASA satellites have captured images of Hurricane Irma from space, slowly crawling across the Caribbean — and they are even more horrifying to behold.

As of Wednesday afternoon, the eyewall of Hurricane Irma was still off the eastern shores of the British Virgin Islands, but meteorologists expect the eye may cross over part of Puerto Rico as early as Wednesday night. The eyewall has the strongest winds within a hurricane and often causes the most damage as it crosses land; basically, think of a hurricane's eyewall as a tornado on steroids. Hurricane Irma has sustained winds of 185 mph, with wind gusts of 225 mph captured across the Caribbean, according to Reuters.

Even though the Hurricane Irma cone has begun to track to the east, according to NBC News, there are still many more very populated places in its path — which unfortunately means that the map of Irma's destruction is only going to get bigger before this insane storm finally comes to an end.