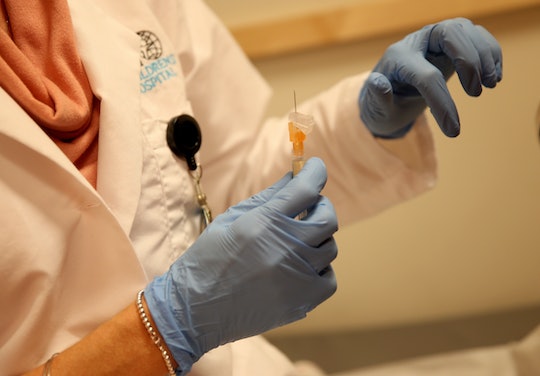 Vaccines remain a controversial topic in the United States. Despite the wealth of information out there that should quell anti-vaccine advocates, the raging debate has only grown bigger in recent years. Now, a map of vaccination laws put together by the National Conference of State Legislatures proves exactly why the country needs to address the problem head-on.

According to the map, a color-coded guide of state legislation mandating vaccination, most states have either religious or personal exemptions, meaning that if parents don't want to vaccinate their children for either of those reasons, they don't have to. (Every state maintains a medical exemption, for obvious reasons.) Currently, rates of vaccinations remain high overall in the United States, but "pockets" of unvaccinated children can still lead to outbreaks of various diseases, according to the CDC, which is the biggest concern.

"[These pockets] exist in our communities and they leave these communities vulnerable to outbreaks of vaccine-preventable diseases," Dr. Anne Schuchat, director of the CDC's National Center for Immunization and Respiratory Diseases told reporters in a briefing last year, according to Reuters. According to Schuchat, although MMR (mumps, measles, and rubella) vaccines are recommended for children — along with flu shots, and later, HPV vaccines for older children — many parents remain wary about the side effects of the vaccines for a myriad of reasons, all of which have largely debunked. The NCSL's latest map (see below) clearly shows why medical professionals everywhere are becoming frustrated: As parents in states with vaccine exemptions learn of those exemptions, it's more likely they're going to exploit them based on irrational fears.

There are plenty of reasons the vaccine backlash has occurred but high-profile media and individuals promoting it certainly doesn't help. Recently, a film touting the dangers of vaccines and linking them to autism, Vaxxed, was pulled from the Tribeca Film Festival because of pushback from filmgoers. Much of the science surrounding the anti-vax movement, activists claimed, had been questioned by the scientific community both domestically and abroad; They claimed the film was a form or misinformation that would do more damage than good.

As often as those who choose to not vaccinate their children speak out about the dangers of autism, the instances of measles outbreaks are going up. According to the CDC, the biggest flare ups in recent years are mainly exacerbated by those "pockets" of unvaccinated children — whether it's at an amusement park or within the Amish community in Ohio. The MMR vaccine is 97 percent effective if children get the required shots. In addition to safeguarding one's own child, parents protect their neighbors by following the vaccination guidelines.

As far as the claim that vaccines are related to autism goes, the facts aren't really there, according to many health officials. It probably doesn't help the cause that most of the data debunking the link between vaccines and autism comes from the CDC, since many in the anti-vax community also distrust CDC itself. For its part, the organization is also working with various committees, including the Inter-Agency Autism Coordinating and the National Vaccine Advisory Committee (NVAC), to promote knowledge, scientific data, and "better use of research" into vaccine resources.

We can't protect kids from everything. But the flu, mumps, measles, and even HPV? We can do that much, at least. As increased amounts of information begin to trickle down to the masses, hopefully fewer states will suffer from their own vaccine exemption laws — and hopefully the NCSL's map will change.