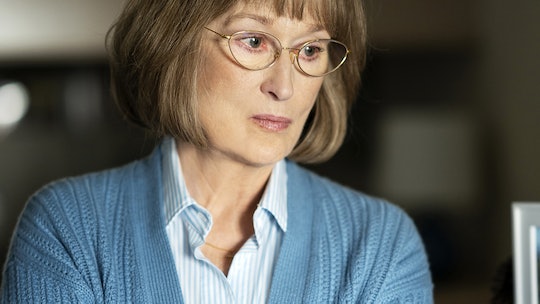 Mary Louise from Big Little Lies is truly an artist. Never in all my years of television-watching have I ever met a character who is as dedicated as she is to ruining the lives of everyone she meets. In the Season 2 episode of the HBO series, titled "Kill Me," Perry's mother gets into a heated custody battle with Celeste, and no one is willing to back down. However, as any viewer would know, nothing is quite as it seems, and now there is a Mary Louise theory from the Big Little Lies fandom that will have you questioning the recent motives of the new character.

Like clockwork, fans flocked to the internet to talk about everything that went down during the Jul. 7 episode. In a discussion thread on Reddit, user Nyrfan1026 proposed a conspiracy theory that suggested Mary Louise wasn't actually interested in taking custody of Max and Josh. Instead, the fan wondered if Mary Louise was using the court system to investigate what really happened to Perry.

"She is not stupid and definitely picked up on there being more to the story," the Redditor wrote. "[Mary Louise] can tell there is serious tension among the [Monterey Five], and is expecting one of them to crack on the stand and she will finally get her answer that 'her son didn't just accidentally slip.'"

Meanwhile, in a separate thread within the Big Little Lies subreddit, KisRozsa expanded Nyrfan1026's theory. The fan also proposed that Mary Louise plotted an elaborate plan to get Celeste arrested for murdering Perry, but then they suggested that Mary Louise could be drugging Celeste to get her desired outcome.

"She is deliberately being hostile and pushing Celeste to court," the Redditor continued. "In the last episode it shows all the women meeting and talking about having to testify and in the trailer you can see dramatic court scenes."

The fan also hypothesized that the secrets and lies of the Monterey Five will surface in an upcoming episode. They explained that lawyers could be egged on by someone like Mary Louise to "say that Bonnie was lying to protect Celeste (since Bonnie would have no motive in their eyes) and that Celeste deliberately pushed him." Then the fan predicted that because Celeste told no one about Perry's abusive behavior before that night, it could potentially be used against her in court.

However, if this does happen, the fan offered a potential out. "What I’m hoping is that Jane got a rape kit done," KisRozsa wrote. "And then they can do a paternity test and at least show that he was a violent rapist and that would help back up Celeste’s abuse claim."

That said, some fans don't think that Mary Louise would act alone. In response to the theory, ricecrsptreat claimed that Detective Adrienne Quinlan could be the mastermind behind all of it.

"I think that this is all a big scheme by Detective Quinlan. We never were fully shown her and Mary Louise's conversation," the fan wrote. "I truly think the detective is working with Mary Louise so she can get the women back on the stand."

Regardless of what Mary Louise is cooking up on Big Little Lies, most fans just hope that all her plans backfire. But as always, everyone will just have to wait for Sunday night to roll around to see what happens.