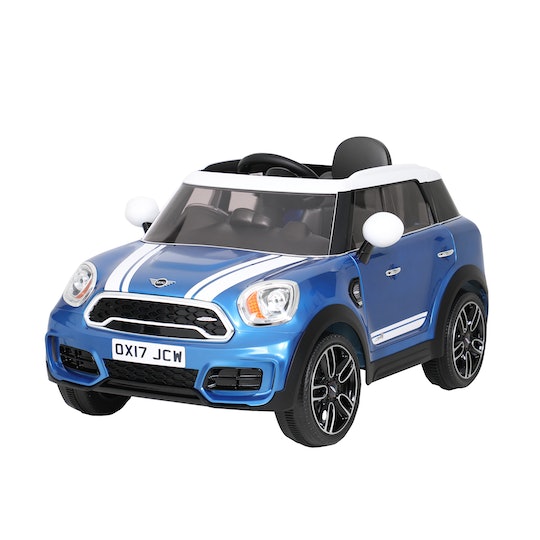 The days of the flimsy plastic Barbie Jeep are long gone, y’all. Kids apparently have much more lavish tastes these days. Enter the fancy new MINI Cooper ride-on car for kids featured at the 2020 Toy Fair in New York City, available to purchase for $250 in the fall.

Along with the Mini Cooper Countryman, two versions of the ride-on Porsche Macan Turbo SUV made their grand appearance at the Toy Fair. The Wave Catcher version "handles like a scooter and rides like a skateboard" per the website, and the Nighthawk reminds me of a fancy high-tech version of those butt scooters we rode around on in elementary school.

These toy ride-on cars seem nicer than my own real car. In fact, I wonder what the weight limit is for these because I just might want to cruise around the city in one of them for an evening. I could probably do so comfortably, too. The pint-sized MINI Cooper is complete with a realistic dash, cup holder, horn, “roaring engine sounds,” and working radio, per the press release.

Unfortunately for me though, the MINI Cooper is supposed to be for kids ages 3 to 6 years old. And the whopping 5 MPH is just enough to keep little ones from running full speed into the dog, but not quite enough to get me around town. So let the kiddos ride and live vicariously through the included remote control, which according to the press release lets you steer while they take the wheel.

The company responsible for these fancy children's vehicles, Rollplay, is pretty well-known for making all kinds of pint-sized replicas of everyone’s favorite vehicles, scooters, motorcycles, and more. It makes sense that kids would want cars that look like their parents' cars. Just think about how cool it would have been to drive a mini version of an ‘89 Mustang around, like my mom’s car, when you were a 4-year-old.

But alas, my kid would have to settle for a 2011 Volkswagen Golf with a bunch of metal stickers in the back window instead of a Porsche or MINI Cooper.