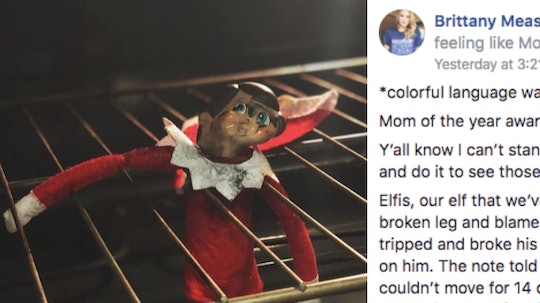 Full disclosure, I never got into the whole Elf on the Shelf thing. Please, I barely held it together as the Tooth Fairy. Adding the whimsical, magical Elf on the Shelf element to my already stress-inducing Christmas rituals seems like it would have really been tempting fate. I probably would have forgotten to move the Elf, or touched it and somehow stolen its magic, or some other tragedy. In fact, this mom who accidentally burnt her kids' Elf on the Shelf in the oven could have been me in another life.

Brittany Mease, a single mom from Wylie, Texas, apparently had the mother of all mishaps with her kids' Elf on the Shelf. It started out well enough, despite the fact that Mease admitted on Facebook that she's really not a fan of the Elf on the Shelf craze, but does it to see the "precious smiles on my beautiful children's faces." She shared on Facebook that she brought out the Elf on Dec. 1, but cleverly had him arrive complete with a broken leg from allegedly tripping over all of the toys the kids had left on the floor (brilliant idea, by the way). She shared in a now-viral Facebook post:

Elfis, our elf that we’ve had for 5 years, arrived on December 1st with a broken leg and blamed it on the kids for leaving their toys out, saying he tripped and broke his leg but Doc McStuffins fixed him up and put a cast on him. The note told the kids that he was on strict bedrest orders and couldn’t move for 14 days.

After the 14 days were up, Mease grabbed the Elf from his perch on the kitchen counter and tossed him in the oven until she could move him later on and keep the happy, joyful tradition of Elf on the Shelf alive.

And then this happened.

According to Mease's rant on Facebook, she forgot the Elf on the Shelf in the oven for a few days. Then her son Gray got a hankering for some baked pasta one day:

I preheated the oven and started cleaning the kitchen. About 4 minutes later I started to smell something REALLY funky and that’s when all hell broke loose and I broke my son’s heart.

Before anyone starts blaming Mease, it should be noted that we've all been there as parents. I mean, not exactly there, maybe, but somewhere in that vicinity. All parents mess up sometimes. It's what we do to fix things that makes all the difference in the world.

Mease wrote that, while her daughter Ily laughed at the burnt Elf and said she was "glad the elf is gone because now he can't tell on her," her son Gray was another story. The sight of his burnt, shrivelled Elf on the Shelf devastated him.

So she did what moms do; she did her best to fix things. Mease wrote on Facebook:

I’m having to scramble and find the other elf we have and then I have to call Santa (in front of the kids) and ask him if he will please pick Elfis up tonight. Ya know, since he is unable to make it to the North Pole to get fixed because his head literally popped off from being too hot once we pulled him out of the oven and his feet are completely melted off.

The response to Mease's honest post about accidentally burning her kids' Elf on the Shelf has been pretty overwhelming. Her post has been shared more than 72,000 times, and people have been sharing their own stories of Elf on the Shelf mishaps.

"My granddaughters dog (lab) ate hers," one Facebook user shared in the comments. "My son in law went everywhere he found one thank god, except to this day my granddaughter says there is something different about her elf."

It seems people on the internet have been moved by the tragedy of Mease's Elf on the Shelf: one person even set up a candlelit vigil for "Elfis" on Dec. 22. And at least 30 people are apparently going.

Elf on the Shelf might not feel worth all the effort sometimes, but the children who love them most certainly are.