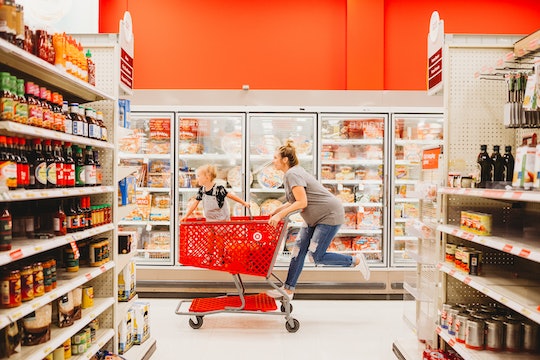 Courtesy of Inspired By A True Story Photography

This Mom Had Her Maternity Shoot At Target, & It’s Real AF

There's nothing quite like getting a maternity photo shoot when you're pregnant: Donning a flowy maxi gown that highlights the bump just right, those stunning floral crowns, ethereal lens flares in the twilight sun. But one mom was having none of it, and instead pulled off quite possibly the GOAT of maternity sessions. Mom Page Miller did her maternity photo shoot at Target — and it. Is. GLORIOUS.

Miller is due with baby number three any day now. A photographer herself, she paired up with Heather Pippin of Inspired By A True Story Photography to create their Target-inspired maternity shoot. Pippin describes to Romper where the idea to do a photo shoot at Target came from. "The shoot initially was just an idea that came from me just wanting to do something different and Page really loving Target," Pippin says in an email.

So in July, Miller loaded up her daughter Avery and headed out to her local Target store in Arnold, Missouri, while Pippin snapped away at their adventures, which included everything from hitting up the in-store Starbucks to going to town on a giant tub of cheese balls in the snack aisle.

Behold, the mic drop of #MomLife with 12 of the best photos from this Target maternity shoot.

Miller is definitely ready for her third child to get here. Pippin tells Romper that while they "didn't plan the shoot based off of her being pregnant," Target and motherhood practically go hand in hand, so it only made sense to roll with the maternity theme.

Miller had a son, Clarke, who died at 3 months old from SIDS. Pippin tells Romper that Baby Malin is Miller's rainbow baby. Thanks to how viral her Target maternity photos have become, she appreciates that they've "turned into a positive way" to help raise awareness about SIDS.

Even though they've named their baby Malin, Miller and her husband still don't know the sex of their baby, and won't until he or she arrives.

Miller tells Romper of her Target runs, which she says happen about three times a week:

I go fairly often. We timed it one day how far it is from our house — it's 4 minutes and 47 seconds hahaha — we have to pass it to get to the highway, so anytime we need just about anything that's where we go.

Her daughter Avery thought the entire experience was "super fun," according to Miller. Unfortunately for Miller, now her daughter thinks cheese ball tub noshing in the aisles is the new norm every time they go to Target.

Who would have thought that Target is the ultimate dress up playground for kids? Filing this one under "rainy day fun" in my big ol' box of parenting ideas.

Target Runs Can Be Exhausting

How did fellow shoppers and Target staff members handle the whole shoot? Miller says they were pretty chill about the whole thing. "We didn't get a reaction at all from them. It was a Sunday afternoon and the employees were stocking shelves and doing their jobs," she tells Romper. Pippin agrees, saying, they got "funny looks from a few people like 'OMG, are they really doing that?' but most everyone thought it was funny and entertaining."

There is so much about this photo shoot that I love, but I think the best part is how something as simple as a Target run became something much more special.

Miller had no problem testing out rocking horses with her daughter in the toy aisle.

Of course, with how much Miller loves Target, there was no way she was just there for a photo shoot — she had shopping to do, too! "I did grab a few things while I was there. I needed some cleaning stuff for the house and I did some preshopping for our hospital visit," Miller says. "And of course I got the cheese balls and Capri Suns." Miller and Pippin win all the photography and internet points with this brilliant photo shoot.