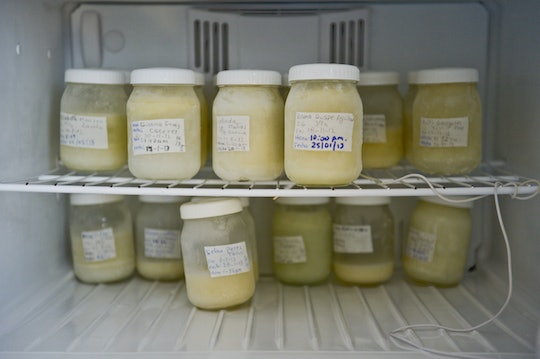 This Mom Donated Her Body Weight In Breast Milk

Losing a child shortly after birth has to be one of the most difficult things a parent could ever experience. But what makes it even harder is that, if their breast milk has already come in, grieving mothers often still have to pump until their body adjusts. For many bereaved women, that breast milk is an understandably painful reminder of the loss of their babies, but when 25-year-old California mom Ariel Matthews realized she could help other moms by continuing to pump, she donated her body weight in breast milk in honor of her son, Ronan, and it's been an invaluable gift.

According to People, Matthews first decided to donate as much breast milk as she could after she delivered a stillborn son, Cayden, a year ago. She managed to donate 510 ounces then (which is still super impressive), but it turned out that, sadly, that wouldn't be Matthews' only opportunity. Already the mother of a 3-year-old son Noah, Matthews suffered a miscarriage after Cayden's death, before getting pregnant again this year and giving birth to Ronan in October. But in posts on her Instagram account, Matthews explained that Ronan was born with a congenital heart defect, and after having surgery soon after birth, also suffered bleeding in his brain. Heartbreakingly, Ronan died 11 days after he was born, but just like she did following her stillbirth, Matthews soon decided that she would continue to pump breast milk and donate it in her son's memory.

This time, Matthews made it her goal to pump 1000 ounces of milk, but according to The Daily Mail, once she surpassed that goal, her father suggested she try to pump the equivalent of her own body weight. And she did: four weeks ago, Matthews announced on Instagram that she had pumped 2,370 ounces of breast milk — about 18.5 gallons, or 148 pounds — and according to People, Matthews gave that milk to three different moms (one of whom had just adopted a foster baby).

Matthews decision to continue pumping was an incredibly courageous and compassionate one for so many reasons — most obviously that she'd just experienced a devastating loss, and no one could fault her if she'd just wanted to let her milk dry up at fast as possible. But then there's also the fact that pumping isn't exactly easy or fun under the best of circumstances, so it's even more amazing that she'd continue to do it. But Matthews told People that she wanted to make the best of an already-heartbreaking situation, and that it was worth it in the end:

It felt really good to donate it all, especially because I would get hugs from the moms when they came to pick it up and thank yous. And that the moms were trusting me to give their babies my milk — it feels really good.

As a mom myself whose children received donor breast milk in the NICU, it's hard to even express how meaningful it really is when women choose to donate breast milk. When my twins were born prematurely at 25 weeks gestation, I couldn't pump enough milk for both of them, which was a big problem, because extremely premature babies need breast milk to help protect them from a potentially deadly complication called necrotizing enterocolitis. All the women who, like Matthews, kept pumping and donating their breast milk when they didn't have to, ultimately helped my children stay alive, and become the happy, healthy 4 year olds they are today.

In addition to posting about her milk donation, Matthews has shared the difficulty of her ongoing grief on social media, writing about how much she misses Ronan, and how she longs to hold him and watch him grow. But even that has turned out to have a bigger purpose: she told People that other bereaved parents have reached out to her, inspired by her strength. Matthews said,

It’s really, really awesome. If good things can come from a loss — if I can encourage people that this isn’t the end, we can get through this, and live a good life, and not let the bad things tear us down. I like to know that there’s actually people being encouraged by this. I’ve even gotten messages on Facebook saying this has really helped me, that I hope I can be like this.

Ultimately, Matthews' message — and Ronan's legacy — is one of hope, and, as she explained on Instagram, it's one she's grateful to be able to share:

I am so honored that God able me to share my story with the world. I almost can't believe all the positivity my story has accumulated. I feel so blessed by all sweet encouraging words from all the people that have never met me. I've always wanted to inspire people, but never knew this would be the reason why. If my story is bringing hope, and light, I couldn't be more happy.

As much as no one deserves to experience what Matthews has gone through, there's no question that what she's been able to do is a total inspiration. And although Ronan's life was far too short, she's helped keep his memory alive in the most incredible way.