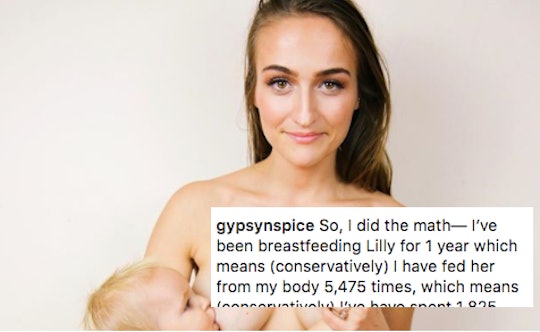 This Mom Calculated How Much Time She's Spent Breastfeeding In A Year & Yeah, It's *A LOT*

For some new moms, breastfeeding is a beautiful, transcendent bonding experience with the infant. For others, it can be relentlessly painful (both physically and emotionally) and frustrating. But whether you fall on the blissful or hair-pulling end of the spectrum (or, more likely, somewhere in between), nursing is always time-consuming. Case in point: In the caption accompanying a stunning breastfeeding Instagram post, one mom shared how many hours she's spent breastfeeding in one year — and, surprise, surprise, it's A LOT. But judging from the absolutely gorgeous photos of baby Lilly that dominate Jenny Tamas' Instagram, many of them feature her nursing her daughter, the time investment is well worth it.

First, the numbers. Tamas posted an absolutely breathtaking pic of herself and Lilly recently to commemorate her daughter's first birthday. She also posted an adorable pregnancy test throwback and even more adorable snaps of Lilly enjoying her birthday cake. But her mission in doing so went beyond wishing her daughter a very happy birthday. As she shared on her Instagram page, Tamas also offered a pretty in-depth look at all the work she's put in to feed Lilly since her birth:

I'm no math whiz, but those figures sounds astronomical to me. I mean, imagine all the books you could read, Netflix series you could binge, podcasts you could listen to, and spinning classes you could take in 1,825 hours. Obviously, moms are master multitaskers, so Tamas probably wasn't solely breastfeeding for all those hours. But still.

And it's not just Tamas. The American Academy of Pediatrics (AAP) recommends that moms breastfeed their babies exclusively for about the first six months of life. Then, moms who follow the AAP's suggestions will continue to do so for up to a year after that in conjunction with the introduction of "complementary foods."

Especially when the baby is very young, that sheer time commitment associated with adhering to what the AAP suggests is huge. During a baby's first month of life, for example, he or she will feed eight to 12 times within a 24-hour period, spending as long as 20 minutes on each breast, according to KidsHealth. This means that, during that first month, a mom could end up nursing anywhere from roughly five to eight hours per day.

Babies tend to feed less often as they get older and their growing stomachs are able to hold more milk inside of them. Still, you have to respect Tamas' commitment and her daughter's breastfeeding routine — and for sharing so much of it with her Instagram followers.

And the time the two shared a breastfeeding session looking like a mother and daughter right out of a fairy tale, complete with a horse and flower crowns:

They even took a pic breastfeeding alongside some cows, who were essentially doing the same:

Seriously, could these two get any more adorable?

Breastfeeding is no easy task, and Tamas is doing it with a beauty and grace that will surely inspire other moms to give it a try as well. But, remember: Even when it's not picture-perfect, breastfeeding is a major service to your little one.

So, props to Tamas, and to all you breastfeeding moms out there. You truly do have superpowers.