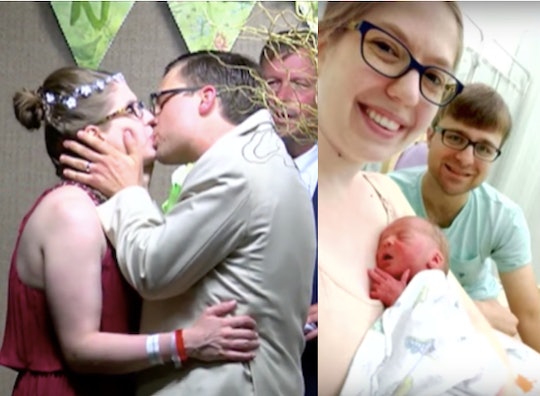 This Mom Got Married 5 Hours After Giving Birth, & She's Basically A Hero

Having a baby. Getting married. Milestones that everyone remembers, especially if they happen within a few hours of each other. That, my friends, is an epic day for the history books. Case in point; this mom got married five hours after giving birth like it was the easiest thing in the world. And now she needs a trophy, because it's crazy unreal.

Jael and John Pulcipher from Williamsburg, Michigan, had a plan. The two were planning on getting married at the end of July in a lakeside ceremony, before the birth of their first child. It was a good plan, lakeside weddings are clearly amazing, but one person didn't care much for their plans. Their baby daughter, who decided to come along on July 29, the very same day they were planning on getting married. Jael went into labor, and her daughter Briar was born six weeks earlier than her Sept. 16 due date. Regardless of the fact that family and friends had already arrived in town for the ceremony, Briar was like, Nope. But just as the baby flipped the switch on their plans, Jael and John did a little switch flipping of their own. They decided, since everyone was already in town, why not put together a ceremony in the hospital? A mere five hours after the baby was born.

Think about your own wedding day for just a minute. The pampering, the mani/pedi, the hair. Instead of all of that, Jael was giving birth. And for those of you who remember that... you see where I'm going with that. As Jael told Babble:

It’s been a crazy whirlwind, but it’s been so much fun!

For his part, John told UpNorthLive:

I told her, ‘If you can’t come to the wedding, then I’m going to bring the wedding to you.' So that’s what we did here, but it took everybody. This isn’t anything that I could do by myself.

Instead of a lakeside ceremony, Jael and John said their vows in the Munson Medical Center conference room with their new baby daughter. Instead of a traditional wedding dress, she wore a great little red dress her sisters picked up from a thrift shop. Even the staff stepped up and helped get the wedding organized within hours, despite being busy with the usual business of saving lives and birthing babies.

And speaking of birthing babies, Jael's favorite part of her impromptu wedding? She told Babble:

My favorite moment was to get to hold Briar together in front of all of our guests. It was a teary-eyed moment for all of us.

After the ceremony, Jael was wheeled back to her room with a "Just Married" sign on the back of her chair. Where she hopefully slept for about 15 hours, because two life events in one day is just too much for any human.