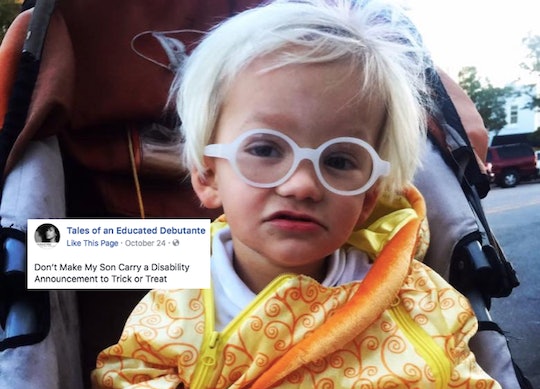 Halloween is just one of those holidays that manages to be fraught for everyone. First there's finding the "perfect" Halloween costume, because kids don't seem to get the concept that they'll get another turn next year and act like their lives depend on this year's costume. Then there's the pumpkin carving, and I really don't need to tell you about the horror show that is pumpkin carving. For some kids, the social interaction element is the most difficult of all. And while this new trick-or-treating trend is intended to help children who struggle socially, this mom is outraged about it. And she absolutely has a solid point.

Trick-or-treating communication cards were developed as a way to help children with autism who have difficulty communicating while trick-or-treating door-to-door. According to a tweet with an image of the cards, they are handed to the person at the door and read:

These cards make sense, in theory. They offer the adult who is handing out candy the opportunity to check themselves before trying to pressure a child into saying "trick or treat," and are ostensibly meant to help non-verbal children enjoy the time honored tradition of collecting candy from strangers one night of the year.

But Adrian Wood, the mom blogger behind Tales of an Educated Debutante and mother to 3-year-old son Amos (who is autistic) is having none of it.

While some might see these communication cards as an opportunity to give strangers a helpful heads-up, Wood wrote in a recent Facebook post that she saw things quite differently. "Don’t Make My Son Carry a Disability Announcement to Trick or Treat," Wood started the post, adding:

[T]ruthfully, I really wanted to like them. They are well designed and child friendly and you can fill out your child’s information. The cards which I thought initially were to be pinned on a costume, are actually to pass out as your child trick or treats. Now, let me just say, I have no problem with being real and honest, but this card thing burns me up.

Wood, who is a mother of four children including Amos, went on to point out that nobody expects adults with disabilities to walk around with cards explaining themselves, which makes sense. Those cards would define a person before they had a chance to decide what sort of definition they might like for themselves. It wouldn't be fair for an adult, and it certainly isn't fair for a child.

Wood went on to note that instead of making her 4-year-old use these cards, she will speak to those who open the door on Halloween. She explained:

Let’s have a conversation and I’ll be honest and hopefully you’ll see the amazing joy that my shark/Peter Pan/R2D2 (we can’t decide) brings our family. Life is not understood by printed messages on cards. Empathy is built upon interactions, relationships and putting yourself in another’s shoes.

Parents have resonated with Wood's message. One Facebook user noted that the cards are "cruel" while another wrote: "No one should have to carry around a card explaining their special needs in order to get a damn piece of candy on Halloween!" Dozens of others wrote that they agree with Wood's opinion on the cards.

So, her advice for Halloween? Simply "be kind."

"It just seems like a card does little more than a hall pass to me," Wood tells Romper. "Being kind shouldn’t depend on our perceived view of manners or judging why someone has on a costume."

As for what Amos is planning to dress up as for Halloween, Wood said that he has narrowed it down to "either Peter Pan or a shark."

This year on Halloween, adults should simply try to be aware that every child comes with their own inner set of rules, and it's not up to you to decide what those rules might be, especially as a stranger. Be kind without a note reminding you to be kind, without expecting small children to be labeled and defined. Parents of children with autism are working hard to make sure their children can be included, whether they are taking their kids out on practice runs, allowing them to trick-or-treat in their regular clothes, or help them with sensory sensitivity.

Your kindness will mean the world to them, and their child — and you don't need a card to remind you.