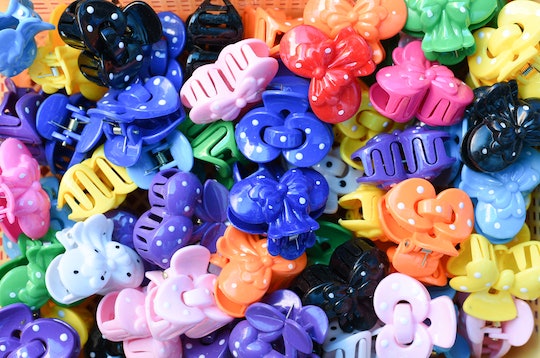 Nap time is a sacred experience for many parents out there. A time to recharge the batteries for both baby and parent, a time to rest, soothe and relax the mind. It's meant to feel like a safe space, I think, but sadly that's not always the case. After her toddler suffered through a near-death experience, this mom is warning other parents about hair clips. It's such an innocuous item that can be so much more dangerous than anyone might have suspected.

Rebecca Fitzgerald, a mom of two from New Zealand, had put her little girl's hair in pigtails and laid her down for a nap. She explained to One News New Zealand in an interview that her daughter, Charli, had fallen asleep in the car and Fitzgerald then "transferred her straight into her cot." Some time later, she heard her wake up on the monitor, but then she heard nothing. And what followed is every parent's worst nightmare, as she told TVNZ:

She just stared at me just vacant and just trying to gasp for air. And she was just really floppy, no noise, just every now and then you would hear this gurgle which meant then there was a tiny bit of air getting in, but obviously just not enough.

It seems that one of Charli's hair clips had come loose, and she was choking on it. Fitzgerald immediately called the local emergency services and called out to neighbors for help, but nobody heard her, according to the news outlet. So, she waited for what must have felt like a million years.

As she told TVNZ, she tried to dislodge the hair clip, but to no avail and it hadn't budged by the time paramedics arrived. Even after their arrival, it still took a considerable amount of work to get the hair clip out of Charli's throat. Paramedics had to use a suction cup device to remove the object, according to TVNZ, which was finally out of her throat in the back of the ambulance, just moments away from the hospital.

It's easy enough to panic, especially when your child is in danger. But there are certain steps you can take to help safely dislodge an object from your child's throat. According to Parents, if your child is older than 1 year of age (as was the case with Charli) you should:

Paramedic Lucy Kershaw told TVNZ that one of the best things a parent can do, immediately, is to "pick the baby up, tilt them with their head down, and give five blows between the shoulder blades in the middle of the back." Kersha added, "The amount of force required is varied, but they're quite sharp and you want to be checking each time to see if the obstruction is released."

As for the object in question, it might be a good idea to wait until your child is older to put them down for a nap with any small item — even a hair clip. While hair ties and hair clips are fun, especially if you have a child who is willing to let you do their hair, it's tough to know what a curious child might do with them.

Happily, Charli was able to recover. But Fitzgerald is sharing her story with other parents because she wants people to learn from her terrifying experience.

More Like This
17 Best Potty Training Products For Toddlers
Parents Who Ran Marathon With 6-Year-Old Share Statement After CPS Visit
What Is Monkeypox & Should You Be Worried? Here’s What You Need To Know
'Operation Fly Formula' Begins With 78,000 Pounds Of Baby Formula