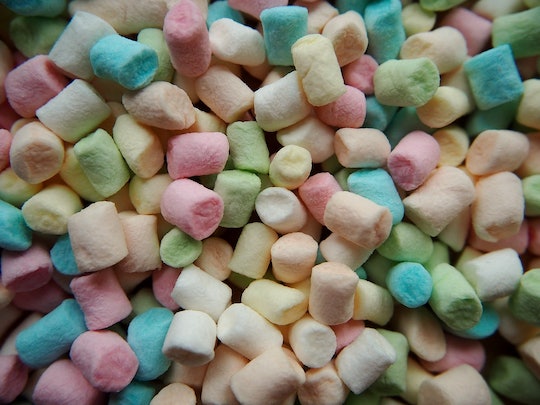 There are certain foods most parents avoid when their children are toddlers for fear of potential choking hazards: hard candies, popcorn, whole grapes that have not been cut into quarters. In general, hard food that is difficult to chew into smaller pieces should be avoided at all times. But what about soft food? While many parents might not realize the danger, this mom is warning people about marshmallows. Because her 17-month-old daughter choked on one recently, and it was a harrowing experience.

As she detailed in a Facebook post, Niamh Reid of Ireland was picking up her 17-month old daughter Doireann from her daycare center when she made a horrible discovery — little Doireann had been given a marshmallow as a treat and couldn't swallow it. Reid told The Independent that her daughter was "turning blue" and lost consciousness. As emergency services were called, Reid and her husband David watched their daughter in despair as she remained unresponsive. She told the publication:

It took what felt like an eternity for the emergency services to come and just before they did she let out a cough and an almighty cry, just like she did on the day she was born. I've never been so relieved, in that moment I really didn't know what would happen.

Doireann spent two days at a local hospital and has recovered, but the experience left Reid with a mission; she took to social media to share the dangers of offering seemingly innocuous marshmallows to small children. She wrote in a Facebook post:

Last weekend we had the utterly terrifying experience of watching our baby girl loose consciousness while choking on a marshmallow ... I have promised myself that I will make others aware that marshmallows and children do not mix. Sometimes I like to think I know everything but I did not know this!! The melting marshmallow begins to seep down the throat, expanding and blocking the airway making it impossible to dislodge. Even if the marshmallow does not begin to melt, it is a very airy sweet which is easily sucked down the airway if talking or laughing while it is in the mouth.

Reid went on to recommend that parents simply get rid of any marshmallows they might have and to spread the word. Because, as she pointed out, her family was one of the "lucky ones." They got to bring their little girl home.

In 2010, the American Academy of Pediatrics recognized the potential choking hazards of marshmallows — along with other serious food culprits like hot dogs and grapes — by asking the FDA to issue warning labels on packaging to caution the public. While choking on latex balloons caused the most damage at the time — 29 percent of fatal choking incidents were caused by accidentally inhaling a piece of balloon, the AAP reports — foods like marshmallows and peanut butter shared a similar danger. The AAP report explains:

Many of these foods ... share the same high-risk physical characteristics that create effective plugs for the pediatric airway. Similar to latex balloons, peanut butter can conform to the airways and form a tenacious seal that is difficult to dislodge or extract.

The latent danger of soft foods like marshmallows needs to be shared with parents and caregivers of small children, and Reid's post has already made a difference. It has been shared nearly 5,000 times, and the comments below her post are full of people being tagged to warn them to stay away from the marshmallows.

Because let's face it; there are plenty of foods that can be given to small children as a treat that won't potentially cut off their oxygen supply. The marshmallows can wait.