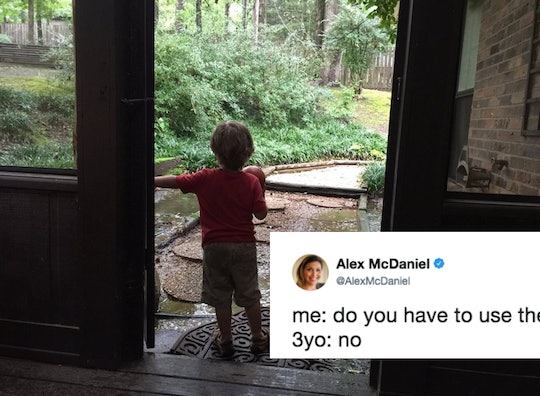 Sometimes, people just take themselves, or others, too seriously. Especially on social media, it seems. I mean, nobody should really have to worry about making some sort of off-the-cuff joke about their kid in a harmless setting like Twitter, right? Wrong, guys, oh-so wrong. Because this mom posted a joke on Twitter, and Child Protective Services came knocking on her door. So I guess that's a thing that everyone can look forward to now.

Alex McDaniel, the Director of Content and Audience Development for Magnolia State Live, was recounting a conversation she had with her 3-year-old son to her followers on Twitter. At the end of the story, she made that joke most parents have made, "3-year-old for sale. $12 OBO (or best offer)."

So my main concern would be that she should reconsider her price point (also please note that was a joke, just in case), but one of her followers apparently felt it was serious enough to report to Child Protective Services in Lafayetteville as a possible case of human trafficking. That, my friends, is not a joke. As McDaniel wrote about in an essay for TIME earlier this month:

The saga began when a caseworker and supervisor from Child Protective Services dropped by my office with a Lafayette County sheriff’s deputy. You know, a typical Monday afternoon ... They told me an anonymous male tipster called Mississippi’s child abuse hotline days earlier to report me for attempting to sell my 3-year-old son, citing a history of mental illness that probably drove me to do it.

A "history of mental illness" was apparently based on sharing her stories of her wonderfully sassy and hilarious son, many of which she shared with readers of the Oxford Eagle. Including this fabulous article called, "Conversations With The Most Ridiculous 3-Year-Old I Know."

What followed after Child Protective Services came to McDaniel's door was the "most hellish week" of her life. She had to take her son out of his preschool, McDaniel wrote, pulling him out of a "deep sleep during naptime, and did everything in my power not to cry in front of him on the drive back to my office."

After suffering the unbearable indignity of a home visit and inspection by a Child Protective Services caseworker, the case was closed. In a very short period of time, because there was "zero evidence" that she was planning on selling her child. While McDaniel was quick to point out in her TIME essay that she does not blame Child Protective Services for doing their job, she noted that there was a deeper issue underneath this anonymous report.

It seems McDaniel has been vocal about some of her political beliefs, especially concerning the removal of Confederate flags and statues, and wondered if this was perhaps a targeted attack. As she wrote, this really wasn't a case of someone's lack of a sense of humor, but perhaps this might've stemmed from conflicting beliefs. Those suspected petty differences forced Child Protective Service agents to take valuable time away from actual cases where children could have needed real protection. She wrote in her essay:

What upsets me more is the idea of anyone using an agency designed to protect Mississippi’s most vulnerable children as a weapon to take someone down for no legitimate reason. Time and resources that should have been spent on children and families who genuinely need it were instead dedicated to a tweet, and all because someone out there probably got bent out of shape that I don’t see the world the way he does.

McDaniel told Romper that she was "encouraged and disheartened to hear from parents around the county who had gone through similar situations resulting from anonymous tipsters," adding:

I understand and completely support child protective services protecting the identities of those who call, but when you have a situation like mine — where the tipster wouldn’t even let CPS know his identity — it allows anyone to use child abuse reporting as a weapon against parents. All CPS had was a phone call and a single tweet and suddenly I was under investigation. This is Mississippi. We have so many children in need of CPS services and not enough time or resources to go around.

At first glance, it might seem as though McDaniel's investigation by Child Protective Services was about someone's obtuse lack of a sense of humor. But was it? Or was this a case of a person lashing out at a mother, hitting her where it hurts most, simply because they had a difference of opinion? That can't happen, guys. Like, ever again.