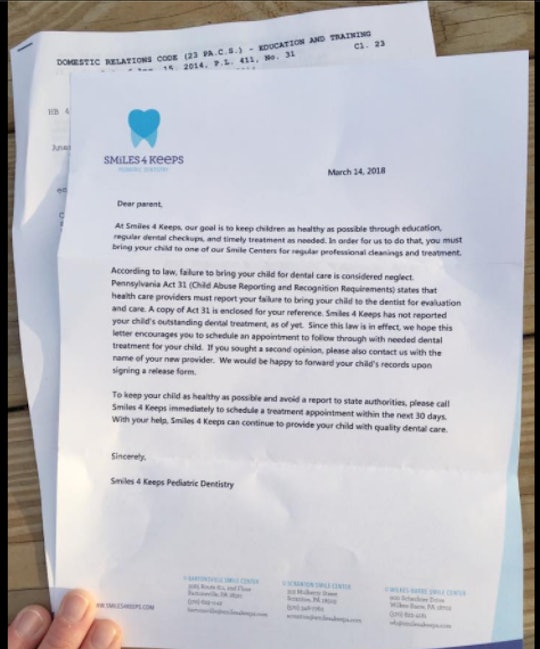 Imagine picking up your mail at the end of the day. You sit down at the kitchen table, maybe with a coffee at your elbow. Take a minute to look through the letters and see one from your kid's dentist. It shouldn't be a big deal, right? A reminder for a cleaning, a check up, the usual suspects. Not like this mom's letter from a dentist threatening to report her to the authorities over a missed follow-up appointment. Imagine opening up that letter as a mom, feeling threatened and judged by a dental practice for "neglecting" her child.

It's what happened to Pennsylvania mom Trey Hoyumpa. Last week, she opened up a letter from a local dental office, Smiles 4 Keeps, letting her know that she had missed a follow-up appointment for one of her children. As Hoyumpa noted in an email to Romper, the letter did not specify which child had missed the appointment, nor did it "list any actual complications, concerns, or procedures." In fact, the letter did not address Hoyumpa nor her husband by name. Instead, the letter goes full tilt into accusation mode, noting that "According to the law, failure to bring your child in for dental care is neglect."

Pennsylvania Act 31 (Child Abuse Reporting And Recognition Requirements) states that health care providers must report your failure to bring your child to the dentist for evaluation and care.

Romper reached out to Smiles 4 Keeps for comment and is awaiting a response.

While the dental practice acknowledged in the letter that they hadn't reported Hoyumpa's failure to bring her child to the dentist at that point, it remained an option. And Hoyumpa was understandably upset at the accusation that she was neglecting her child. She took to Facebook to share the letter, writing, "Got this letter in the mail today. Smiles4Keeps bullies the parents, controls the care behind closed doors, and turns parents into villains…and I will not stand for it anymore!!!"

She explained to Yahoo Lifestyle:

In November, Smiles 4 Keeps said that my kids had seven cavities between them, which sounded outrageous. I asked the receptionist to schedule both kids' [follow-up] appointments on the same day so I wouldn't have to take off work twice, and she refused. I got really angry because it showed that they didn't care about their patients.

She wasn't the only one who was angry; hundreds of parents took to Facebook to respond to the letter:

Wow. This is over the top and so crazy. I hope all their customers leave!

I understand that kids need to have any cavities treated to prevent any further future damage (if they even have them to begin with.) But this practice goes out of their way to send you a threat to call child services AND includes a copy of the law? That’s insane. Find a better dentist elsewhere, I’m pretty sure another dentist would probably see that they don’t even have any cavities.

Hoyumpa says that she told the receptionist her family would not be returning to the practice because of the inconvenience of not scheduling her kids' appointments together and also because she was reportedly not allowed to stay in the room while they were having procedures, nor was she ever able to even meet the dentist. After she shared her experience on Facebook, Dr. Wezmer of Smiles 4 Keeps defended the letter to WNEP, saying:

People who got upset by that letter, they don't understand that dental problems can very rapidly turn into a very serious medical problem. It's only getting worse, unfortunately. And it's getting younger. The kids that are getting the care are getting younger ... We really have to jar the parent to realize that with a child comes responsibility.

Hoyumpa noted that she has not been contacted by anyone in the office since sharing the letter.

Letters that refer to dentists' mandate to report failure to seek necessary treatment are sent under specific conditions ... and the letters are not sent unless attempts at multiple communications with the parents or guardians are unsuccessful or messages from our office remain unanswered. Letters are not sent after one missed treatment appointment. If a parent or guardian chooses to take a child who requires treatment to another provider, we ask for the name of the new treating dentist so we can record the information in the patient's record. We remain responsible for the patient until the parent relays the name of the new dentist.

There is a massive difference between being a health care provider concerned for a child's welfare and sending out what looks to be a form letter blithely accusing parents of neglectful behavior if they miss a follow-up appointment. Making harmful assumptions won't help anyone, and the best way to ensuring any child's well being is to encourage open communication between health care providers and parents.

So skip the form letters, perhaps, and talk to parents with a little empathy. It could make all the difference in the world.