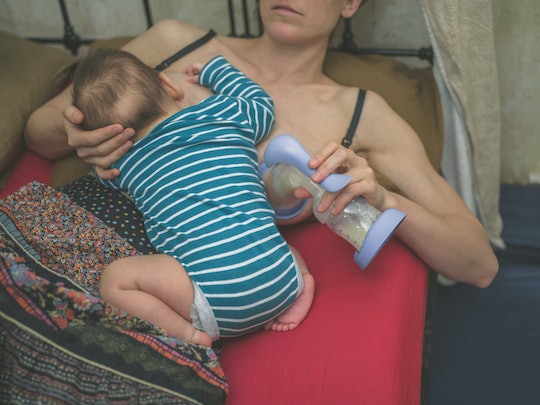 This Mom Is Selling Her Breastmilk Online To *Very* Unlikely Customers, & She's Making A Fortune

Most mothers who produce breast milk simply feed it to their babies, end of story. But when it comes to breast milk overproducers, it would be a shame for extra milk to go to waste. Some mothers give extra milk to friends; others donate it to mothers in need. And then, there are mothers who sell their extra breast milk to men, for a variety of reasons. For example, Rafaela Lamprou, 24, recently fell into one such business — and she's making a fortune off it, as reported by the Daily Mail.

"I gave birth to my son seven months ago. I had a lot of milk and I thought I needed to do something with it so I started storing it," Lamprou, who lives in Cyprus with her husband and two children, explained to the Daily Mail. "But it was too much — it was taking up all the chest freezer. It was full. I didn't know what to do with it." According to the outlet, she was producing two liters of milk per day. So, she began giving it away to other mothers in need. "So I asked a couple of mums who were having trouble breast-feeding if they wanted it. I started giving it away," she continued. "I liked seeing the new mums' faces when I was able to help them."

However, a more lucrative opportunity quickly presented itself: men began approaching Lamprou, who works in a hotel, asking to buy her breast milk. "I then started to get some enquiries from men. It started with men who were interested in body building. They say it is good for building muscle mass," she told the Daily Mail. One thing led to another, and men who had something very different in mind began reaching out to Lamprou. "But then I started to get enquiries from men with fetishes," she said.

Lamprou doesn't know exactly what happens with the breastmilk that she sells to men with fetishes, and it took her a little time to adjust to the idea. "I have no idea what they do with it but they tell me they consume it," she told the Daily Mail. "It was a bit strange at first giving breastmilk to a guy with fetishes but as long as it is just that and not asked to show any part of my body, I don't mind it at all. I am open minded." She has expanded her business by starting a Facebook group where customers can contact her. She also gets some clients from a website, but stays away from those who seem creepy. She has already made about £4,500, which is about $6,200 USD.

Not to mention, she has the full support of her husband Alex, 33. "My husband is so supportive of me," she told the Daily Mail. "He is really cool about it. He is happy as long as I am."

The need for donated breastmilk is ongoing, with an estimated 40 percent of NICUs now using donated milk in the U.S., per the Washington Post, but the screening process for donors is intense, and donors cannot get paid for their milk because administrators worry that a mother might neglect her own child to cash in, per The Atlantic.

Meanwhile, there is actually quite a bit of literature on breast milk fetishes, also known as erotic lactation or lactophilia. As explained by Psychology Today, those with the sexual fetish are often aroused by suckling on a lactating woman's breast, watching a woman lactate, or having sex with a lactating woman. There is also a corner in the pornography world dedicated to lactation pornography. As Psychology Today notes, many disapprove of such pornography, as it is too closely related to pedophilia and incest. Additionally, a profile by Rolling Stone explored adult nursing relationships (ANRs), which are exactly what they sound like. As the outlet notes, ANRs are often sexual, but are sometimes simply intimate.

And despite all the information available about the topic online, it's still not quite clear exactly what men who buy breast milk for sexual reasons do with it — but I've now done enough Googling on this topic for a lifetime, so if you're curious, feel free to do some research of your own.