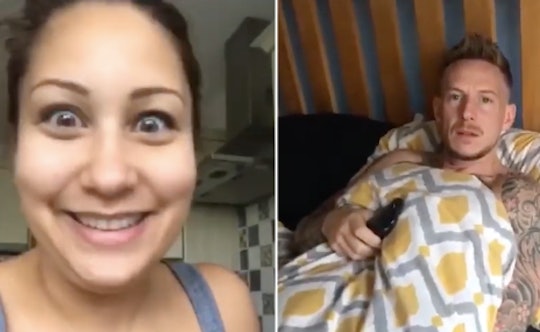 In my experience, moms tend to get saddled with a whole lot of work. So if they need to cut loose and pull the odd prank every now and again, good on them. After all, where's the harm in having a little fun, right? Apparently some people just don't have much of a sense of humor when it comes to mom pranks, especially if the prank involves breast milk. When this mom tricked her husband into drinking her breast milk and shared it in a now-viral video, a lot of people were royally pissed about it. Because there's just something about that sacred nectar that just sort of freaks people out, I guess.

British mom Charlotte Adams decided to have a little fun with her husband's tea one recent morning. It seems she decided to spike her husband's morning hot drink of choice with her baby daughter Ivy's drink of choice: breast milk. It seems Charolette has a surplus of bottled breast milk prepared for her daughter, and decided to have a little fun with it. In the video posted to British parenting site Netmums Facebook page, Charolette is super excited to mess with her husband Rob's tea, because it's funny, OK? When Rob takes a sip, Charolette asks him how he's enjoying his tea. He says he thinks it tastes "funky," and asks her what she did to it. She eventually asks him:

How would you feel if I told you I made your tea with my breast milk?

Rob seems a little angry at first, then grins. Probably because Charlotte is just loving the prank so much. Also she served him breakfast in bed, so I feel like life is pretty good for Rob.

While the actual pranked person got over being served breast milk in his tea immediately, the rest of the internet wasn't so quick to forgive. The video has been viewed over 150,000 times, and the comments flooding in have been... interesting. Some people even went so far as to call a little breast milk (not arsenic laced breast milk, just the regular kind that comes out of humans) disgusting.

"The most disgusting thing I’ve ever seen," one Facebook user commented.

Another Facebook user was apparently incensed by the trick and made a truly NSFW comparison between breast milk and... you'll see:

Am I the only one thinking WTF? I was bf 2 years and it never ever occurred to me once to think it's funny to put bm into my ohs food or drinks. I mean we wouldn't appreciate it if they'd wank in our cuppa would we?

Still, not everyone was so devastated by Charolette's prank. There were several moms who admitted they wouldn't do the same thing, only because their breast milk was too precious to waste on a prank. "Anyone else thinking why would you waste breast milk?" one viewer quipped. "It took me twenty minutes to get 2oz. That stuff is precious...like gold!"

Another user agreed, tagging her partner with the message: "I would do this to you but I wouldn't want to waste my precious breastmilk on you!"

Really, at the end of the day I think Rob should be thanking Charlotte for sharing some of her incredible breast milk with him. I mean, has he even considered the health benefits she has shared with him? According to Web MD, Rob can now look forward to decreased chances of ear infections, bouts of diarrhea, and respiratory illnesses. There's even a company out there trying to harness the immunity boosting powers of breast milk in pill form for adults. So Rob is way ahead of the game.

Breast milk is pretty glorious. Maybe everyone should just relax and let a busy mom have a little fun.