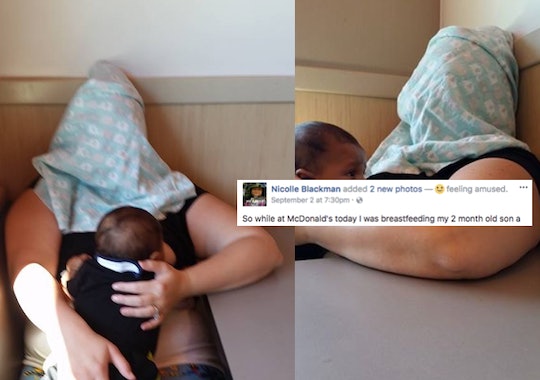 Some people just know how to shut haters down without even breaking a sweat. And Nicolle Blackman of Seattle, Washington is one of them. When this mom was asked to cover up while breastfeeding, she handled it so beautifully you're going to wish you were as quick on the draw in the same situation.

Blackman was at a local McDonald's south of Seattle feeding her 3-month old son Cameron recently. The two were in a corner of the restaurant, Cameron feeding happily, when a woman reportedly approached Blackman and asked her to "cover up." She told The Independent:

I was very annoyed when she said that. Why would I cover up my son? He holds his breath when he’s covered.

How people are still asking anyone to cover a baby with a hot blanket while they try to eat is beyond me, but happen it did. And Blackman thought the woman was asking her to stop because, even more unbelievably, the woman's husband was staring. As she told The Independent:

I was surprised. I think she was upset because her husband was looking. He didn’t seem to pay her any attention when she was talking. I noticed he was staring. I understand people are curious and it doesn’t bother me. I’m going to feed my son regardless. His wife was really concerned but I wasn’t concerned.

And so, Blackman did as she was asked. Literally. She covered up. Her face, that is.

So while at McDonald's today I was breastfeeding my 2 month old son a lady told me her husband was staring at me and could I cover up. My 11 year old daughter has never seen me cover up so she snapped some pictures because she was upset I'd cover up.

Yes to this, all day and night. Especially considering her impressionable daughter was sitting there, watching her mom's reaction. What's more, as she mentioned in her Facebook post, it was Blackman's daughter who proudly took her mother's picture, according to The Independent:

Blackman explained to Redbook that she wanted to share her experience with other moms who might feel pressured to cover up during breastfeeding:

I'm hoping to help other women by speaking out about it to encourage them to stand up for their children. I have been told many times that I should feed him in the bathroom and I said, "that's disgusting, would you eat in the bathroom? Why would I feed my child in the bathroom?"

Why, indeed? Breastfeeding is, literally, the most natural way in the world to feed a baby. It is incredibly common; according to a survey conducted in 2014 by the Centers for Disease Control and Prevention, 79 percent of mothers breastfeed their children. And that number continues to rise. That's a whole lot of mothers expected to huddle inside public washrooms feeding their babies. Moms have to leave the house sometimes, folks, it's the way the world goes around.

Every woman has the right to breastfeed her child wherever she is and whenever that child happens to be hungry. And if more women like Blackman are willing to represent for breastfeeding mothers everywhere, perhaps the shaming will end.