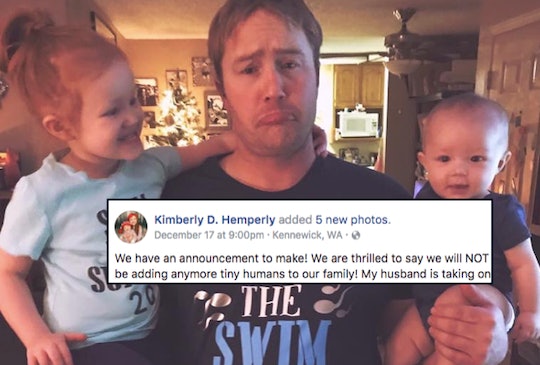 This Mom's "Balls Voyage" Party For Her Husband's Vasectomy Is #RelationshipGoals

Everyone these days is all about #RelationshipGoals. Kristen Bell and Dax Shepard. Blake Lively and Ryan Reynolds. And they're, like, great and everything, don't get me wrong. But they've got nothing on the Hemperlys, in my opinion. Don't know who I'm talking about? Kimberly Hemperly is the mom who threw a "Balls Voyage" party to celebrate her husband's vasectomy. And what's even better? He loved it. Which means they are my new #RelationshipGoals and also I think Kimberly and I should probably go ahead and become best friends.

Hemperly is a stay-at-home-mom of two from Kennewick, Washington. She and her husband welcomed their second child, a baby boy, just this year, as she shared on Facebook. Their daughter is 4 years old. The couple decided that they were done birthing babies after their second as born, and she told Scary Mommy that her husband volunteered to have a vasectomy to make the decision official:

I had two C-sections so he volunteered to go under the knife so I wouldn’t have to again.

Aware that not every dad on the planet might be so quick to volunteer to go under the knife in order to take one for the team, as it were, Hemperly decided to do a little something special for her husband. Something to show him how much his selfless decision meant to the whole family.

Enter the "Balls Voyage" party of his dreams (I bet).

We have an announcement to make! We are thrilled to say we will NOT be adding anymore tiny humans to our family! My husband is taking one for the team and to celebrate this momentous occasion I felt the need to throw him a little “Balls Voyage” party for his upcoming procedure. Because omg y’all nobody is more excited about this than me.

She pointed out to Romper that she was originally inspired by a "Balls Voyage" party Lydia McLaughlin held for her husband on a yacht on an episode of Real Housewives of Orange County. But I think she really went next level — yacht or no yacht.

As for snacks, Hemperly told Romper she had a very *specific* theme in mind:

I wandered the grocery aisles searching for anything balls/sausage related and went from there.

So how did Hemperly's husband feel about the little Balls Voyage surprise party? She told Romper:

He was totally surprised when he got home from work and found all the treats. He thought it was thoughtful, caring and of course hilarious. He had no problem with me sharing it on social media because he said "it's not like everyone is going to see it". He's been an AMAZING sport about it though. Anyone that that knows us, especially me, knows that this is 100% my sense of humor. I love laughter, and finding the light in any circumstance.

See what I mean? Total #RelationshipGoals. And I'm certainly not the only one who thinks so. Hemperly's Facebook post, has been shared more than 46,000 times, with over 65,000 likes. Which tells me that Hemperly might have started a hot new trend. I hope 2018 will see more Balls Voyage party pics posted on Pinterest. Not because I'm so desperate to see a bunch of dudes getting vasectomies or anything... I'm just dying to see how many more phallic-themed foods people will come up with to have at their parties.

Because that would be amaze-balls.