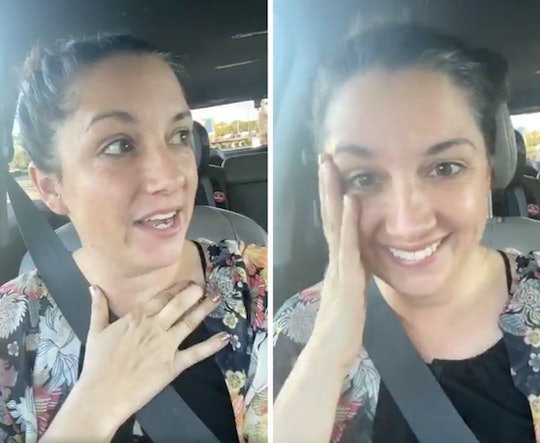 According to Buddy the Elf, "the best way to spread Christmas cheer is singing loud for all to hear." Mary Katherine Backstrom may not be singing, but she sure is laughing hard enough to meet Buddy's standards after her Christmas spirit led to a hilarious mishap in a Wawa parking lot.

The Florida-based mom blogger and author who curates the popular Facebook page Mom Babble shared a delightfully funny video on Dec. 6. In an incredibly viral Facebook post, the busy mom shared in a live video that she found herself with a little extra time to spare. Her kids were staying at school to watch a movie, so she thought she would "kill some time" by heading over to a Wawa convenience store and gas station. While there, Blackstrom explained in the video — entitled "My Most Embarrassing Moment (Christmas is SO Magical)" — that she was sort of overcome by the Christmas spirit.

After she got her laughter under control, Blackstrom shared with her followers that she was at Wawa standing in line behind a woman buying some Ginger Ale and offered to buy it because it's Christmas. After the lovely exchange, she went outside and saw a man clearing off a windshield on a car, which she thought was hers. As such, she simply assumed this was more of the Christmas spirit going around.

"I'm convinced this is the Christmas magic, and so I'm like, oh gosh, I just love this time of year," she said. "So I walk up to this man and I am like, 'This is my favorite part of humanity. I love Christmas so much. Thank you for doing this.' And I give him a hug."

Only it wasn't her car... He was just parked close to her cleaning his own windshield. Yes, she hugged a total stranger and then took off to a different parking spot to laugh about it in her car because, as she noted, "What do you do?"

This video has gone viral since Blackstrom first posted it on Friday, with 49 million views and counting. Fans can't seem to decide what they like more — the fact that Blackstrom can't stop laughing or the situation itself. "OMG this is hilarious!!" one viewer commented on the video. "Hey you did a good deed and made everyone's day! You made me laugh."

Hopefully the man Blackstrom hugged in the Wawa parking lot will see her video and realize why she hugged him. Hopefully he will pay it forward by spreading some Christmas spirit himself. Hopefully he will not do this by hugging a stranger.