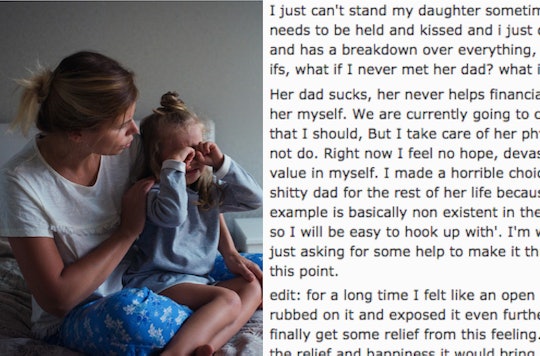 Some days the internet can be a dark and stormy place, particularly for moms looking for reassurance. In fact, I think I would generally caution mothers against looking to social media feeds if they are having a rotten day and need a little perking up. That's mostly because mom-shamers trolls exist and are constantly circling, looking for weakness. And the internet is their territory... most of the time. But, it shamers stayed far away this time and the internet's response to this mom's dark confession gave me renewed hope for humanity. Because, in this case, human empathy prevailed.

About a year ago, a mom who went by the distressing Reddit user name unfitmom posted a confession out into the ether. She admitted that thing we are never supposed to admit: she said she "hates being a mom."

I literally hate being a mom. I cannot stand it, every morning It feels like I'm just waiting for night to get here so she can go to sleep and I can have some time and peace to myself.

The desperate Reddit user wrote that she had dated her 3-year-old daughter's father for about a year when she found out she was pregnant. While he promised her he would stick around, things did not turn out that way. As she wrote, he left her to fend for herself and she was forced to move in with her parents, and doesn't feel especially welcome there either. Her job doesn't pay the bills, she feels alone, and she simply doesn't feel any sort of "connection" with her daughter.

I just can't stand my daughter sometimes, I do not feel a connection, she is a very touchy little kid who ALWAYS needs to be held and kissed and i just don't have it in me. Her crying immediately gives me a headache, she whines and has a breakdown over everything, i hide in the laundry room to get some peace. I keep on thinking of the what ifs, what if I never met her dad? what if I was free? what if I never had her? what if i was happy?

This sort of raw, emotional confession might often bring out the worst in other parents, who can often seem more focused on patting themselves on the back for a job well done than helping someone who is clearly in need. Not so this time. Reddit users showed up for this mom in a very real sense. Some single parents who wanted to reassure her that things will get better and they'd been there themselves, like Reddit user Irixian who wrote:

As a once-single dad, I can say that it gets better. The court will help you financially by forcing her father to pay child support. If he insists on visitation - which he likely will when he's forced to pay - that can give you the space you need to regain some of your sanity.

While Reddit user Magicsupermilk urged the writer to go easy on herself:

Comments came in droves from men and women of all kinds, telling her to trust herself, that it would, indeed, get better, that it's OK not to feel all loving when you're under so much pressure. Rather than mom-shaming her (which seems as though it would have been catastrophic in this case), some wished they could offer a hug, some recommended therapy... but mostly, people actively paid attention to her needs.

And perhaps that did the trick on some level.

After reading all of the positive responses, the frustrated mom wrote:

I have never felt this kind of support since I became a parent, from absolutely anybody. my situation is not normal or conductive to happiness. I have a lot of things to think about and plan, but for once in a long time i feel a little bit cheered on. this is my biggest shame, thank you for taking the time to message me your stories, and the advice, no way i can put in words what it has meant to me.

Finally it seems like the milk of human kindness was victorious. That the internet is still full of people who genuinely want to help someone who is desperately trying to survive.

Today felt like a good day for the internet. I hope tomorrow does, too.

More Like This
Dr. Jill Biden Just Delivered Some Frank, But Powerful, Advice On Motherhood
Reddit Applauds Mom Of Five Who Stood Her Ground & Left Sleeping Dad Behind
Sex And Mom Guilt: When I Date Someone New, Am I Cheating On My Kids?
I’m A Newly Single Mom. How Do I Get Over My Body Insecurity?