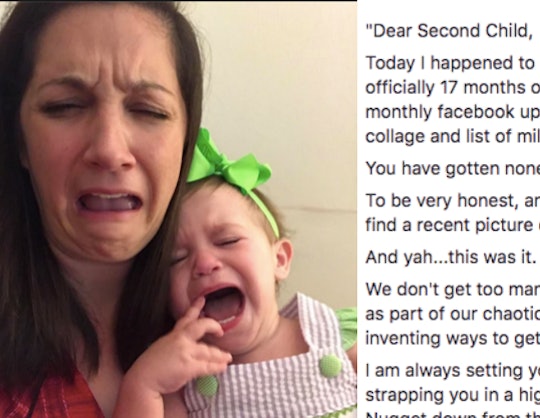 People always tell you that having a baby will change you, and they're right. Everything changes when you have a baby. But sometimes, people forget to tell you how much things will change when you have a second baby. How hard it can be to juggle their needs, how it can sometimes feel like, no matter where you are, you're needed somewhere else. Like you're doing it wrong. Not paying close enough attention, always distracted and divided. Any parents who are feeling stressed out in a similar situation should take a minute and read this mom's letter to her second child. Because it's just about the most realistic depiction of life with more than one kid out there right now.

Mary Katherine Backstrom, the mom behind the community blog Mom Babble, is the mother of two. She has an older son and a 17-month old daughter. Backstrom knows what it's like to feel divided, so she decided to sit down to write a letter to her daughter on the day she turned 17 months old — a day she would have treated quite differently with her first child. As she wrote in her post shared on the Breastfeeding Mama Talk Facebook page:

Today I happened to glance at my calendar and realize that you are officially 17 months old. I feel bad about that, because your brother got a monthly facebook update his entire first two years, complete with a collage and list of milestones achieved. You have gotten none of those things. To be very honest, and this is embarrassing, I had to go digging just to find a recent picture of the two of us. And yah...this was it.

Backstrom went on to admit some fairly painful things; the fact that she often feels her attention is divided "disproportionately," because her toddler son is "constantly inventing ways to get hurt." The fact that she has called her daughter by the dog's name more than once, something I might have been guilty of myself once or twice. But she went on to make a pivotal distinction; just because she might be distracted, does not mean she loves her daughter any less than her son:

My love for you is fierce. It's independent and unique. It stands alone. You, my sweet, sweet second, are an irreplaceable part of this family. You have made us whole. Honey, what am I trying to say is this: You were born second into this family, but you will never be second in our hearts.

It's no secret that parents tend towards lightening up significantly when they have their second child; where the birth of a first child can be rife with fear, curiosity, and excitement, by the time parents welcome their second baby they've sort of seen behind the curtain. They know what to expect in some ways, but maybe not in all ways. Because the parenting guilt of trying to love and care equally for these two children can hit hard and often with more than one kid to care for. As many moms who identified with Backstrom's letter can attest.

"My first had her baby book filled out and completed," one mom commented on Facebook. "Three scrapbooks and many photo sessions taken by photographer. My son has a FB album and 2 photographer taken photos a year with his sister. That's ok because I would rather do things together than make scrapbooks."

Another Facebook user pointed out that sometimes, it's the older child who seems to be getting less attention. "I'm the opposite. My oldest is 8, Facebook was just getting started and I didn't use it much," she commented. "My second is turning 3 and it's a big thing now, lol. As an 8 yr old he doesn't require my attention 24/7 like his toddler brother does."

At the end of the day, parents love their kids the best they can. And, in my experience as a mom of four, kids know you're trying your hardest. They know, as Backstrom wrote, that they are not "second in your heart." So, if you're feeling stressed out and overwhelmed, let yourself off the hook a little.