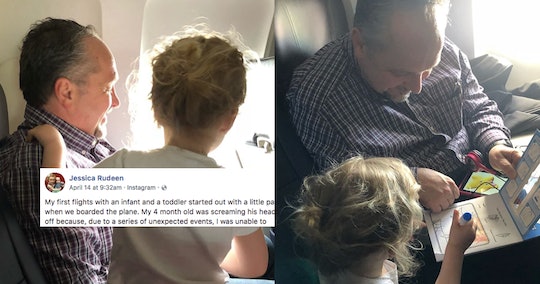 Jessica Rudeen had a long day ahead of her. She was up at 4:30 a.m., racing to catch a flight with her 3-year-old daughter and 4-month-old son. They were flying out of Kansas City to Wilmington, North Carolina with a stopover in Charlotte, North Carolina. Trying to make sure your kids cooperate is hard enough under normal circumstances, but on a cramped flight? When they're tired and hungry? Any parent who has flown with kids knows the drill, and it can be horrendous. But, it doesn't have to be, according to this grateful mom's now-viral post about a stranger helping her with her toddler during a flight. Because there are kind, compassionate people everywhere, as Rudeen told Romper, and sometimes they step forward in your hour of need.

Rudeen boarded the American Airlines flight with two of the worst problems a traveling mom can experience: a hungry baby and an overexcited toddler. Especially when this is your first time flying with little ones; it's never easy. But here's the thing: most parents know this. They're either still living through it, or remember it, or can, at the very least, empathize about how tough it can be to travel on your by yourself with young kids.

And if you're lucky, a compassionate father of two will be seated next to you when your kid has an epic meltdown and you need to breastfeed your baby.

"My first flights with an infant and a toddler started out with a little panic when we boarded the plane," Rudeen explained in a Facebook post on Saturday, which has since gotten more than 12,000 reactions and nearly 5,000 shares. "My 4 month old was screaming his head off because, due to a series of unexpected events, I was unable to nurse him before boarding the plane."

She continued, "My 3 year old, who was excited before boarding the plane, lost her nerve and began screaming and kicking 'I want to get off the plane! I don’t want to go!' I honestly thought we’d get kicked off the plane. So with two kids losing their minds, I was desperately trying to calm the situation."

And this is when a stranger stepped in to save the day; without even waiting to be asked, if you can believe it. Her seatmate, who held her baby while she settled her 3-year-old daughter Caroline, then spent the rest of the flight entertaining little Caroline so that her mother could feed the baby. As Rudeen explained on Facebook:

During the flight, he colored and watched a movie with Caroline, he engaged in conversation and showed her all the things outside. By the end of the flight, he was Caroline’s best friend. I’m not sure if he caught the kiss she landed on his shoulder while they were looking out the window.

When the little family exited the plane, it seemed that the stranger named Todd was also going to be on their next flight. Instead of moving on with his day, Rudeen explained on Facebook that Todd switched his seat so he could help them out on the next flight and even lead them to their gate holding the little girl's hand. Which made Caroline especially happy.

Rudeen explained in her Facebook post that Todd's own wife had once been in a similar situation, flying alone with their two sons, when a stranger stepped in to help. While many people took to Facebook to tout Todd as something of an "angel," Jessica Rudeen told Romper:

Todd would be the first one to tell you he's not an angel, he's just a normal person doing what he can to help.

In fact, Rudeen's take-away from the experience has been this: that "acts of kindness are more common than you think." She explained that her post has struck a chord with so many people simply because they can relate to it, she told Romper.

"They’ve been in that situation where someone has offered to help, or they wish they had, or they felt judged. From all across the board, people have been able to relate to it, if they helped themselves or needed the help," Rudeen shared with Romper.

Sure, Todd might not be an angel, but his actions have had an impact. He has reminded people that helping out a mother who is struggling on a flight is always a good idea. He might have even restored a little faith in humanity for some people. And best of all; Rudeen told Romper that Caroline asks to see Todd's picture every day. And she says he's her best friend. If that's not impactful, I don't know what is.