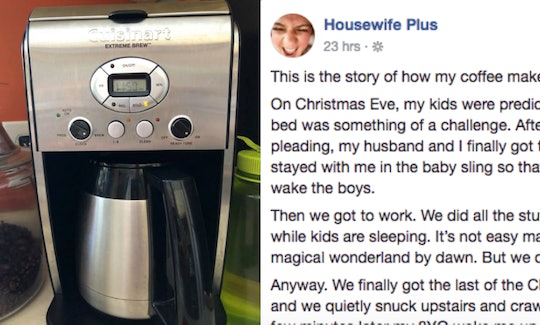 Christmas is over, and much like the pain of child birth, the memories are beginning to soften around the edges a little for parents everywhere. Memories of those stressful hours of shopping are starting to be replaced by sweet thoughts of Christmas Eve snuggled up by the Christmas tree. Because this is how most people manage to get excited every year; you have to forget the stress and retrain your brain to remember all of the good things. It's a good idea to write some of the better stories down, like this mom's post about how her coffeemaker saved Christmas. She's going to want to hold on to this gem from year to year, because you know it's going to become part of her family lore.

Sarah Cottrell is a mom of three and a writer living in Maine. She writes about her life with her kids on her Facebook page, Housewife Plus, and most recently she wrote a story about keeping the magic of Christmas alive. Or more specifically, how she was trying to keep the magic of Christmas (meaning Santa Claus, of course) alive for her oldest son, 8-year-old Finn, when her 4-year-old Cuisinart coffeemaker stepped in to help her out.

Cottrell opened her post with a glimpse of what her Christmas Eve looks like after she puts the kids to bed, and yes it's basically every mom on Christmas Eve:

On Christmas Eve, my kids were predictably bonkers and getting them to bed was something of a challenge. After bribes, threats, and straight-up pleading, my husband and I finally got the boys to sleep, but the baby stayed with me in the baby sling so that if she woke up, her cries wouldn’t wake the boys.

After finally getting the kids to sleep, she and her husband got to the important work of "making a basic living room into a magical wonderland by dawn." It's exhausting, and it's not even like you can own up to being exhausted because your kids assume you were in bed asleep while Santa came and did all the work.

The parents finally got to bed, and within minutes her 8-year-old was standing over her, wanting to know if it was Christmas yet. As Cottrell wrote on Facebook:

Seconds later, I’m in my son’s bed staring at the ceiling and whispering over and over, “No, you can’t have more water, no, you can’t check on the dogs to see if they are sleeping. No, you do not have to pee. No, you don’t. No. You. Do. Not. FINE! I’ll get you a pee jar."

Her son would not let up, he was desperate to get downstairs to see if Santa had actually come. Much like most kids on Christmas Eve and who can blame them? Santa is basically the best guy ever.

The exhausted mom decided to enlist the help of her gurgling coffeemaker to try to get her son back to sleep, as she wrote on Facebook:

I was exhausted and desperate for just six minutes of rest so when I heard the coffee maker automatically go off and start brewing, I knew I had an opportunity to get my kid to quiet down and be still.I turned my face toward my son and I whisper-screamed, “OHMYGAWD!!! DO YOU HEAR THAT?!” His eyes got huge. The coffee maker was making these low rumbling sounds that with a little bit of suggestion sure did sound an awful lot like a big fat jolly elf rummaging through a sack of toys.

She was hoping for a few minutes of sleep, but moments later the coffeemaker alarm went off. But this quick thinking mom came up with a great excuse for the sound:

“Oh! That was Santa’s pager! It means his time is up and he has to get to the next house.” My 8YO jumped out of bed and ran to his window before I could say anything.

The family lives near an airport, so when her son looked out the window he happened to see some red lights up in the sky. And it was enough to make a believer out of him, as his mom wrote:

Sure, she might not have gotten a wink of sleep. Christmas Day might even be a bit of a blur for her. But the memory that will stick for years to come will be that of a little boy who got "proof" that Santa was real from her coffeemaker.

And it really doesn't get any better than that.