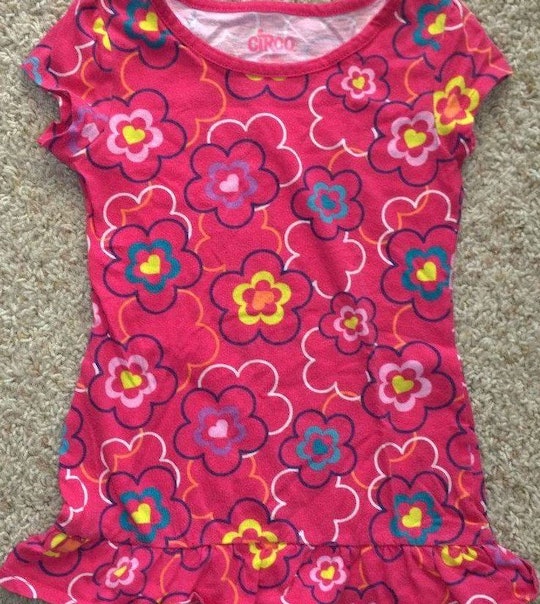 After the last rough few months in news, do you think you're ready for a feel-good story? Because I know I am. Earthquakes and terrorism attacks and pictures of little children covered in blood and mud and sadness. Luckily, for all of us, there is a story circulating right now that will remind us that people, sometimes, are purely wonderful. This mom's Facebook post to replace her autistic daughter's shirt got an amazing response from total strangers. Because, it turns out, there is still a wealth of love in this world.

Deborah Skouson, a mom of five from Utah, was trying to replace a favorite shirt for her 10-year-old daughter, Cami, who has autism, according to TODAY. Cami has been wearing a variation of the same shirt for the last five years; according to Skouson's Facebook post, Cami got her first one in kindergarten and has had four replacements (mostly found on eBay) ever since.

She got her first one in kindergarten five years ago, and we have found four more since then, mostly on eBay. Her current one is almost unwearable, and eBay has gone dry.

Friends and family naturally offered to pitch in to help track another t-shirt down for Cami, and the story could have simply ended there... but the internet had other ideas.

Skouson was hoping to find at least one replacement for the special shirt, maybe even four or five if she was lucky. In her post, she wrote that this particular shirt by CIRCO stopped being produced in 2011-2012, and that they were running out of options, according to her post:

We will pay for the shirt and the shipping if someone would be kind enough to sell it to us. It has to be this exact shirt!

Skouson's Facebook post was shared by KTVU news anchor Frank Somerville of Oakland, California, in an attempt to help find Cami her special shirt, according to TODAY.

The Facebook post went viral, with more than 40,000 shares. And the shirts just keep on coming. As of Friday, according to Skouson, she had received around 50 shirts in the mail with 178 responses for more to come; one shirt even came from as far away as Germany. Skouson told Glamour:

The response has made me realize that there are so many good and kind people out there. Everyone that has given us a shirt has been a complete stranger, but they have shown such love for my little girl.

People didn't simply offer shirts either; they offered words of love and encouragement. As one of Skouson's Facebook friends Jill Carpenter Skouson said:

The one I found I'll have by the end of the week. The lady says it's free for you. She has a son with sensory processing disorder so she can relate to you 😇 I'm so overwhelmed by all the love. I don't even know this person!

Target has reached out to Skouson with an offer to make the shirts in adult sizes for when Cami is older. As for Cami herself; her mom told Glamour that she is simply happy to have her favorite shirt again.

This means that my daughter will always have her favorite comfort object. This shirt gives her a sense of security and calm, which is a necessity in her little world.

Sometimes people in this world are beautiful. Let's all take a minute to enjoy it.