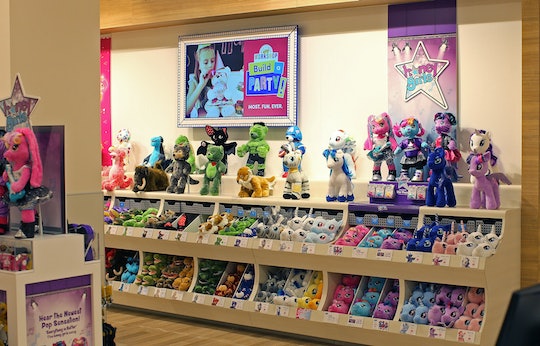 Imagine, if you will, a child's birthday party at Build-A-Bear workshop. I'm kidding, I know you have probably been to 12 such birthday parties this week alone. It makes sense doesn't it? You invite in a bunch of kids and they get to make their own special character and feel all warm and fuzzy then head on home with their warm, fuzzy new friend to keep those good vibes going. Unfortunately that is not at all what happened here. This mom's problematic Build-A-Bear birthday party has got the internet heated, and I'm not sure if I blame them.

An anonymous mom recently posted on Reddit about a birthday party she and her daughter had attended at, you guessed it, Build-A-Bear, as PopSugar UK noted. It seems eight 6-year-olds had been invited to a party, not planned by Build-A-Bear, where they would eat some lunch in the food court and then head over to the specialty toy shop where each child would make their own bear. Her daughter had been to parties like this before so she figured the kids would take home the bear they built as per usual. A bit pricey, as she wrote on Reddit, but "Me and my husband even pitched in about 30 dollars as we know these things can get expensive."

They needn't have worried, apparently. After encouraging all of the children to pick out as many accessories as they wanted, the mother of the birthday girl told the children they were to give their special bears to her daughter as a birthday gift, per Scary Mommy. As the Reddit poster wrote:

Cue the upset and angry kids. They all disappointingly handed over their animals, and friend wasn’t even being nice about it either. Another little boy didn’t want to, and friend ripped it out of his hands. I probably should have said something, but I didn’t. The other parents seemed pretty baffled too.

I'm trying to picture a group of 6-year-olds who thought they were building themselves a stuffed pal and then finding out they had to hand them over... no thanks. When this confused mom approached the birthday mother later to explain that the kids were upset, she was apparently unrepentant, telling her as she wrote on Reddit:

Well I didn’t have enough money for each of the guests to make their own, that would get pretty expensive! If you want your money back I’ll see about getting it back to you. I don’t really see the problem though.

That is really weird!! I can't believe the parents made all the kids give away their bears.

Most posters felt that the mother should have at least explained the situation up front so parents would know what was coming.

All the parents probably also bought this child a gift. What a shitty thing to do. Way to make your daughters party memorable for all the wrong reasons!

I get it that it's tough to plan kids parties. And it's also next to impossible to make everyone happy. But let's face it; telling a bunch of 6-year-olds to build their own bears then hand them over without warning is just a recipe for disaster.

No matter how you slice it.

More Like This
Can Elderberry Help Prevent Illness In Kids? Doctors Weigh In
16 After-School Snacks For Hangry Kids
Tips For Apple Picking With Kids
Prince George Reportedly Got Sassy In A Fight With A Classmate