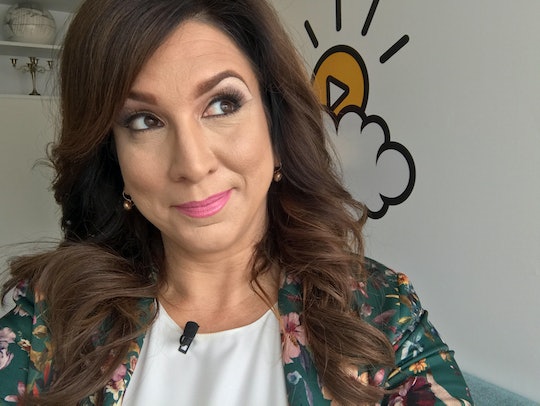 Every woman has a secret little list inside her head of the sort of partner she's looking for — funny, thoughtful, a tiger in the sack, and a sweetheart in the aisles of Target. You know, the usual. For me, there was one item that took priority over most: No football. But most especially, no fantasy football. Because honestly, I can't even. Not anymore. And I know one woman who knows where I'm coming from; blogger Carey Reilly. This mom's rant about her husband's fantasy football team gave me very vivid flashbacks and it was so on point.

Reilly, the blogger behind Not So Skinny Mom and a mom of two (9-year-old John Michael and 12-year-old Ava), honestly has no time for her husband's fantasy football team. But he most certainly seems to find time for it. As she hilariously noted in a recent Facebook rant:

I’ve been noticing that my husband is very distracted lately. We’re at my son’s soccer game, he has his head in his phone. He’s got the laptop open he’s working on it ... what is it that's so distracting to you? He was creating his "pretend" dream team. He’s drafting his fantasy football team!

Spoiler alert: she didn't love it.

Now before the fantasy football league folks take umbrage, let me just say this: if fantasy football is a sideline hobby that's a social, male bonding thing, have at it. But if you're spending all of your time hunched over your computer finessing a football team that will never exist, it's an issue.

As Reilly explains in her video rant:

She goes on to explain that she would like to have her own fantasy team, but it would look significantly different from her husband's. Indeed, her fantasy team sounds like the stuff of my wakeful dreams, as I try to lull myself to sleep without thinking of all my unending lists. As she explained:

Do you know what my drafted Fantasy team would look like? A cleaning lady. No, let’s have two cleaning ladies — this is a fantasy team — a chef, a tutor for the children, a driver, two nannies. And you know what? I would pay to have someone fold my clothes. But I’m not paying. Because it’s fantasy.

That fantasy is better than every version of Magic Mike ever made times a million.

Speaking of the Magic Mike fantasy, Reilly did point out during her Facebook rant that her husband's fantasy football addiction could be considerably worse:

He’s having brain time with his new fantasy friends. And it’s better than him slippin some dollar bills into Destiny’s bikini bottoms.

She also pointed out that a trade-off could be in the works if her husband was willing to play his cards right.

Vacuuming is sexy. Vacuuming could get you weeks worth of fantasy football.

Reilly's Facebook rant struck a chord with men and women alike. To date, it's been viewed almost 150,000 times. The blogger, who is also the host of The Daily Glow talk show, told Romper that she understands why so many women especially related to her fantasy football rant.

Men love to compete. Now they’ve finally found a way to do it while half asleep on the couch. And it’s driving all moms crazy because we have stuff to get done! Our to-do list is never done. Playing anything in a fantasy world is ridiculous to most mothers. We don’t have time for fantasy, we are living int he real world and if we don’t make these lunches for our children they are going to starve. Fantasy that!

Sure, some women might be into playing fantasy football, and more power to them. But this girl right here is ready to sign up for Reilly's fantasy league — because that sounds just magical.