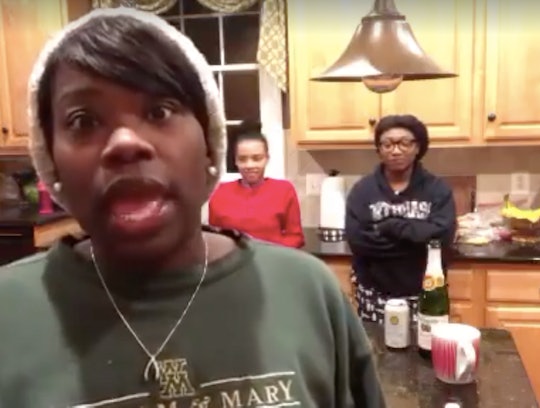 It's the sort of public service announcement that many of us would like to make, though few of us actually do for fear of being rude or coming off as stand-offish — but if it's after 8 p.m., our bras are off, and it's the little one's bedtime, for the love of God, please do not drop by unannounced. Most moms feel like they're the only person in the world who doesn't appreciate surprise guests (it can seem like everyone else has pristine houses and snacks on standby), but the popularity of one mom's rant about surprise visitors proves a good number of mothers feel the same way.

Nicole Walters, an entrepreneur and mother, shared a video with her followers last Friday about an unexpected and fairly "traumatic" experience that had just occurred: she and her family were sitting around in their pajamas when the family next door decided to just stop by for a visit. They rang the doorbell and Walters' family responded in different ways: she and her daughters all tried to hide while her husband trucked over and opened the door.

"It was a little traumatic," Walters said in her Facebook video. "We just had a neighbor stomp over at our house after 8 just to say hello. ... The trauma!"

I like that a neighbor could just pop in. I love these neighbors. They're like my favorite people in this entire neighborhood. We really like them a lot. ... When they came over, it was a mixture of joy and utter mortification, OK? It was like, "Oh my gosh, they still like us enough to just come over! This is amazing!" And then we're also like, "This is terrifying, I'm not ready."

After all, the neighbors' cute son came over while her daughters were in their pajamas, embarrassed. The house was a mess. Walters was recovering from a cold and hadn't worn deodorant in three days ("Somehow I feel the two are connected, don't ask too many questions," Walter explained). The 6-year-old wanted to stay up past her bedtime and Walters had to "parent in front of company," which — as any mom or dad can tell you — is no fun for anyone involved. Nobody was prepared. Even the dog was traumatized.

"And here's the thing," Walters said. "I had to act normal!"

Fortunately for Walters, she's far from alone. In fact, social media is full of people surprised and horrified by neighbors, friends, and family stopping by unannounced:

We're Usually Not Dressed For It — Or Dressed At All

We're Expecting Either Food Delivery Or A Murderer, & Nothing In Between

Walters and her husband aren't the first couple to disagree on the etiquette of dropping in unannounced, and one etiquette columnist totally agreed with Walters' view. As the New Zealand Herald's columnist, Lee Suckling put it:

Here's the thing about unannounced guests: it's not the 1950s anymore. ... Anyone with a speckling of social awareness should be able to take 20 seconds out of their (obviously unoccupied) day to send a text warning first.

Thank goodness for Walters and advice columns that reassure us all that we're not just strange, perpetually socially anxious humans that need to be left alone in our caves without interruption. We just need 20 minutes to grab our bras, make sure the toddlers are in bed, and tuck the mess into the coat closet. After that, we're more than happy to see everyone.