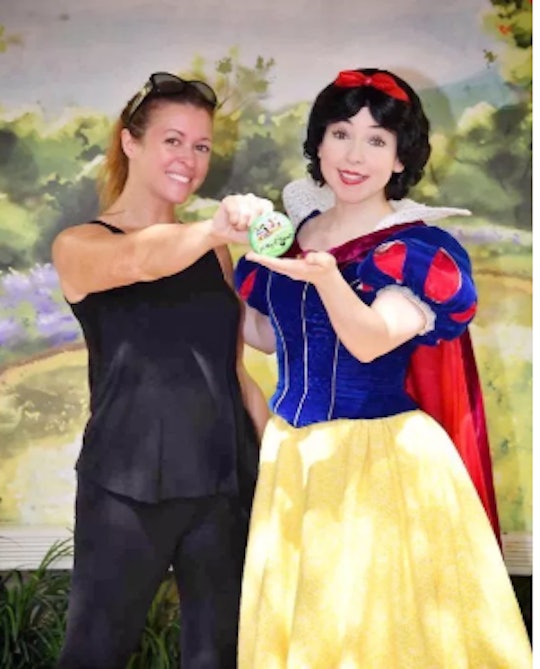 Courtesy of The Castle Run

Every once in awhile the stars align. Let's say you're a mom of four boys and your youngest son is heading off to university in a few weeks. And you are crippled with the fear of jumping into the child-free abyss and wondering what you are going to do next. Then you read about Lisa DiNoto, a woman I've come to think of as the smartest person on Earth. Because she had an idea so simple and brilliant that it pulled me back from the abyss and filled me with hope. That's because this brilliant Florida mom took a solo trip to Disney World on the first day of school and, guys, this should become a thing for every mom out there. Including me.

DiNoto is a Florida resident who lives just "1.2 miles as the crow flies" from the Magic Kingdom, as she wrote on her blog The Castle Run. It seems DiNoto spends a lot of time at "Disney World, where I run a lot, mom a lot, eat a lot," with her husband and two sons. Which is why it apparently didn't seem so strange to her to take off to Disney World on the first day of school. "After I dropped them off it just seemed natural to take a ride over to our 'local park' and enjoy some peace instead of heading right home to do laundry and run errands," she tells Romper.

DiNoto wrote on her blog that she carried her button down Main Street USA in the Magical Kingdom and other parents immediately took notice. "People are going to start stopping you and telling you that you are life goals," she wrote. "They will often be saddled with strollers and lots of tired children. Be gracious. Comfort them. Wish them a magical day…. and try not to skip away."

The actors at Disney World got in on the act, posing for photos with her button and really getting into the spirit of things.

One character in particular got a real kick out of DiNoto's solo day at Disney World while the kids were at school, Cinderella's Fairy Godmother.

"She was laughing so hard she was crying and we just started hugging and laughing together while I squeaked 'THIS IS WHY I MOVED HERE!!!!'" she tells Romper. "She reached into her sleeve and pulled out a bag of pixie dust and handed it to me and said 'This is for YOU and ONLY YOU. You use it today!!' It was one of those moments of connection that is really what the parks are all about."

As DiNoto clearly already knows, mental health and motherhood don't always go hand in hand. It is an emotionally taxing role, and one where breaks can be few and far between, which is why she believes other moms should consider taking time for themselves.

"I believe with all my heart that moms are allowed to (and should) have mental health days," she tells Romper. "Or afternoons. Or minutes if that's all that they can squeeze in — and we've all been there!! I would throw myself in front of a bus for my boys — but my love for them in no way contradicts the fact that I'm proud of how independent and happy and kind that they are and that I know that I function better as a mother when I take care of my own wellbeing, too."

I don't know about you moms out there but I might be Googling Disney tickets for one adult at this very moment. Because moms deserve a little magic too, right?

More Like This
The “Tripledemic” Is Scary, But I Feel Less Helpless When I Wear A Mask
Amazon Just Launched A New Feature To Tip Your Delivery Driver $5 — At No Cost To You
Here Are Parents' Top Trending Searches In 2022, Because Google Really Is Our BFF
Viral Reddit Post Asks If A Toddler Can Watch Cartoons Without Headphones On A Plane