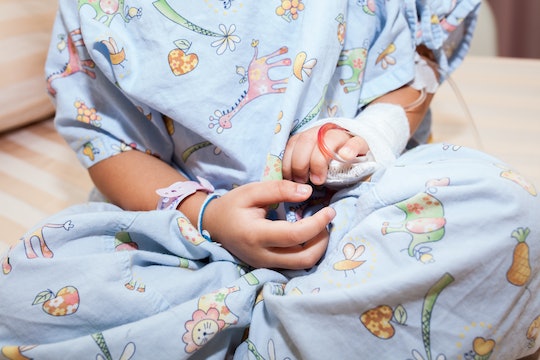 Being a parent in the digital age definitely has its pros and cons. While it can certainly be helpful that pretty much any parenting question you can think of is now fully Google-able, the internet and social media can also be a breeding ground for lots of fear mongering and mom-shaming. One particularly hot-button example? The anti-vaxx debate. If you have a young child, then chances are you're familiar with the scary memes and "facts" on the internet that can easily convince you that childhood vaccines are downright dangerous. But after this mom's unvaccinated son caught whooping cough at 18 months old, she's now trying to warn other parents who may have also bought into social media anti-vaxx rhetoric, and let them know that they may be making a very risky mistake.

In her heartbreakingly honest Facebook post, Missouri mom-of-three Jessica Leigh Boren opened up about her decision to opt out of vaccinating her youngest child, Brody, after being left "terrified" by anti-vaxx messages on social media that convinced her that to vaccinate her son would be to "pump her baby with poison." Though Brody did initially get some shots — like many parents, Boren said she'd decided to try "spacing them out" — he didn't get any vaccines after he was 6 months old. But Boren explained that when her son recently caught whooping cough, she realized that she'd inadvertently allowed him to acquire a brutal illness that could have been entirely prevented.

As Boren's example shows, sometimes, the fear of potentially harming your child is enough to make you believe that skipping vaccines is actually for the best, and in many cases, anti-vaxx parents really are just trying to do what they think will keep their children safe. The problem though, is that the scary anti-vaxx social media stories can ignore the fact that when unvaccinated children actually catch the diseases they were supposed to be immunized against, the result can be devastating.

In a video that is honestly hard to even watch, Boren posted a clip of a miserable Brody struggling with his cough — one which, according to the Centers for Disease Control, might last "for up to 10 weeks or more."

Boren explained in her post that her son's illness began with him "struggling to breathe and turning blue with every cough," and after two trips to the ER in which doctors determined her son had bronchiolitis, she ultimately pushed them to test him for whooping cough (aka pertussis).

Even though whooping cough outbreaks have occurred in recent years, Boren said doctors felt confident that it was "too rare" of a disease to be what was causing Brody's symptoms. But when the results actually came back positive, Boren's son had to be admitted to hospital, placed in a "Bio-Hazard hospital room" to prevent the spread of the disease to other patients, while Boren and the rest of her family had to be quarantined at home for five days.

Boren explained that her post wasn't intended to bash anti-vaxx parents, or blame them for her son's illness, but instead to make other parents aware of the incredibly painful cost that accompanies vaccine-preventable illnesses. She wrote,

This is my baby holding onto his mommy and daddy for dear life. Petrified of the people in scary masks and gowns.

This is my baby being poked, prodded, x-ray’d, suctioned, connected to wires upon wires, unable to move and roam like a toddler desires.

This is 4 days of him not eating or drinking on his own. Having fluids pushed so dehydration wouldn’t add on to the list of problems.

This is knowing your son could have this cough for up to 100 days and knowing there’s nothing you can do about it. No way to take away his pain.

This is Pure Hell.

This is guilt. Guilt of putting not only my son at risk, but my community too.

While many unvaccinated children are lucky enough to not acquire vaccine-preventable diseases, the truth, as Boren learned first-hand, is that skipping out on vaccines really does leave kids vulnerable. It's why the Centers for Disease Control and the American Academy of Pediatrics recommends that children receive all recommended vaccines on time, and it's also why doctors and researchers are continually working to raise awareness about vaccine safety, and debunk the rampant myths about immunizations.

*Many* studies, for example, have made it clear that there is absolutely no link between the MMR vaccine and autism, and in March, researchers published a study showing that the idea of so-called "vaccine overload" — the belief that kids are getting too many vaccines than their immune systems can handle — was also untrue, meaning that spacing vaccines out is completely unnecessary. In fact, the reality is that vaccines are safer now than they've ever been, and they are absolutely the most effective way to keep children healthy.

While it's understandable that internet misinformation has left many well-intentioned parents second-guessing their vaccination decisions, it's also incredibly frustrating. And it's why posts like Boren's are so, so, important: if the scientific research and the advice from actual medical professionals isn't enough to convince parents to vaccinate, then hopefully witnessing the gut-wrenching reality of what having a child with whooping cough *really* entails might finally do the trick.