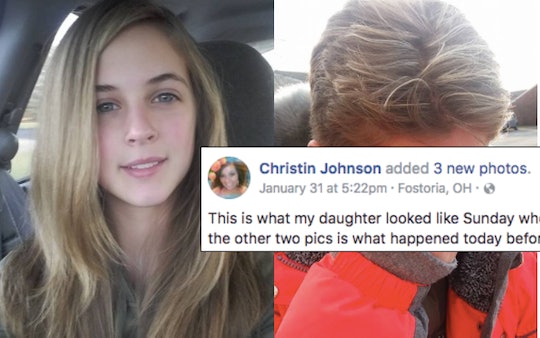 It was one of those special occasion treats; a birthday present, actually. A young girl wanted to get highlights put in her hair, so her mom took her out for her birthday and made it happen. Unfortunately, as Christin Johnson shared in a now-viral Facebook post, things didn't go too well. As BuzzFeed News reported, this mom's viral post about her daughter's haircut has now led to a police investigation for possible child abuse claims. Romper's requests for comment from Christin Johnson as well as the Haskins Police Department were not immediately returned.

Johnson took her daughter Kelsey out for a birthday treat a few weeks ago to have highlights put in her hair, as she shared on Facebook on Jan. 31. The young girl from Fostoria, Ohio looked happy and excited in a photo her mom shared on Facebook, but Kelsey's father and her stepmother were allegedly not happy about the young woman's new hairstyle and Johnson contends that they forced her to cut it all off, as BuzzFeed News reported. Although no explanation was given, and neither the father nor the stepmother have responded to Johnson's post, the alleged move has caused a maelstrom of criticism on Facebook.

After Johnson shared the distressing pictures on Facebook, one of a smiling Kelsey sporting her new highlights and then two more with her hair cut short and her face covered, the post went viral. It's been shared more than 25,000 times and garnered nearly 40,000 reactions with almost 3,000 comments from shocked social media users.

"I'm so sorry. She must have felt awful... I hope she is feeling better. I pray that something is done for her to regain her trust ... I just feel so awful," one commented.

Another wrote, "Just want to let you and your daughter know she's beautiful. Shame on that so called father thinking it's ok to emotionally abuse his daughter."

"What a cruel thing for a parent to do to their child. I'm so sorry that happened but remember that it's your soul that makes you beautiful & you are beautiful no matter what!" another reader commented on Johnson's post.

In the two weeks since Kelsey's allegedly unwanted haircut, the Haskins Police Department has reportedly begun to investigate the reported incident as a possible case of child abuse, as Metro reported. The Middleton Township fire department, where Kelsey's father and stepmother reportedly both work as volunteer firefighters, have placed the two on leave following the incident, as BuzzFeed News reported. Romper's request from Kelsey's father was not immediately returned.

Fire Chief Steve Asmus told BuzzFeed News that they would remain on leave pending the outcome of investigations by child services and the police, although the Wood County Children's Services could not confirm that a case is pending with them, according to BuzzFeed News.

According to an update shared on a Facebook page named "Team Kelsey," it seems Kelsey has since been removed from her father's home and is now "surrounded by her mom, gramma, aunt, siblings also cousins and friends."

As awful as this reported incident must have been for Kelsey, it seems there was a lovely light at the end of the tunnel. According to a Facebook post from Feb. 3, Johnson shared that Lady Jane's in Toledo, Ohio has offered their wig services to Kelsey to help her cope with growing her hair back. Whatever may have happened with her father and stepmother, hopefully the family finds a way to move forward together.