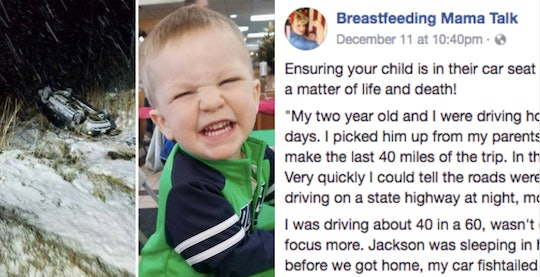 Driving in winter weather conditions can be scary for any parent, especially if you have a kid riding in a car seat. Unfortunately, accidents do happen no matter how careful you are, which is why this mom's PSA about car seat safety is a must-read for all parents. This mom believes a particularly important car seat rule played a role in saving her child's life, and it's something no parent should ignore.

A mom named Elizabeth took to Breastfeeding Mama Talk's Facebook page on Monday to share a very crucial reminder about car seat safety, according to Babble. Elizabeth explained that she and her 2-year-old son, Jackson, were driving home from her parents' house at nighttime in bad conditions, including "slick" roads and "low visibility." Although Elizabeth did her best to prevent an accident by turning off the car radio and by driving slowly, for example, her car fishtailed into a ditch about five miles from her house. Sounds terrifying, right?

Elizabeth is a bit fuzzy on the details of the crash, but she believes the car "flipped end over end and landed upside down in a swamp," according to Facebook.

Luckily, Elizabeth's phone was in reach and she was able to call 911. She wrote in the Facebook post:

There was no traffic, I was upside down hanging by my seatbelt and my son was crying in the back. By some miracle, my phone had not flown so I was able to call 911 right away. I got myself unbuckled and got Jackson out soon after. He stopped crying as soon as he was out of his car seat.

Of course, it's not by luck that Jackson ended up OK.

Elizabeth explained, according to Smart Parenting:

Jackson's car seat was right where it was supposed to be and he was right where I had buckled him. No coat, five point, snug as a bug. He didn't even have marks from the steps after hanging upside down for 5 minutes!

Although it's well-known information that a five-point car seat is one of the safest options for parents, the "no coat" rule isn't as well-discussed. In fact, I had never heard of it before. But the rule particularly hits a nerve with me as I used to babysit kids in Boston, New York, and Baltimore, all cities where big puffy jackets are crucial during the winter months. I didn't think twice about the potential dangers of strapping the kids I nannied into a car seat with a bulky coat, and it breaks my heart to think I put their lives at risk due to this common mistake.

What I've since learned is that a puffy winter jacket can put a dangerous amount of space between the child and the harness of their car seat, according to TODAY. Essentially, your child isn't strapped in a car seat tightly enough if they're wearing a large coat. If the straps are loosened to accommodate a jacket, they can be thrown from the car seat in the event of an accident.

But there's a method parents can use to see if their child's coat is too big or puffy to be worn in a car seat, according to Consumer Reports: first, strap your child in while they're wearing their winter coat. Next, tighten the straps until you can't "pinch" any space between the harness and your child. Finally, put your child back into the car seat without the coat. If you can pinch any space between your thumb and forefinger, the coat can't be worn underneath the harness.

And parents who are ever unsure about the safety of their kid's coat, it's probably just best to go without one. So, how do you keep your kid warm in the car without a coat?

Some options include layering blankets over your child or dressing them in less bulky sweaters and zip-ups, according to INSIDER. I bet there are a lot more creative ways to maintain your kid's warmth sans coat, but these seem to be the most common hacks.

Although it's not for certain that the no coat rule ultimately saved Jackson's life, it probably was one of the major factors that kept him safe. It's great that Elizabeth took the time to share her frightening ordeal publicly, because her advice about the no coat rule could end up saving some lives this season.