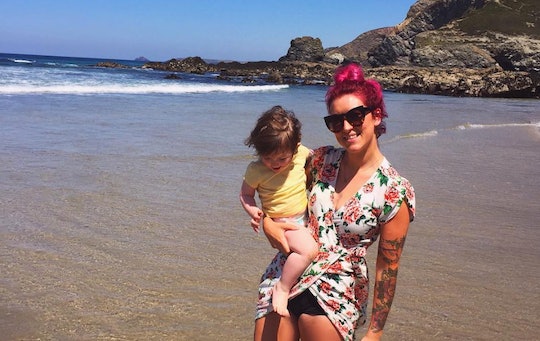 Raising a kid is the kind of journey whose twists and turns are hard to predict beforehand, and it's the type of endeavor that typically requires way more support than one first imagined it would — which is why this mom's viral post about making "mom friends" is striking a chord with so many mothers out there. It's a message of thanks to a close group of women from a mother who thought she'd never actually want mom friends, and it's a story that many new parents can likely relate to.

Gylisa Jane, a blogger from the United Kingdom, shared a Facebook post on Monday that was as touching (and funny) as it was candid. "I never wanted ' Mummy Friends,'" Jane wrote on Facebook, alongside a picture of herself and her daughter. "I didn't want to sit in noisy soft plays, or talk about different coloured sh—."

I didn't want to have knowledge about best nappy brands, or know exactly how many fanny stitches we all had. I had a preconceived idea that Mummy Groups were vicious cliques, and I hadn't been in one at school - I didn't plan to start now.

It's an understandable concern, and many moms don't want to join mothers' groups. Some don't like the idea of wrapping up their identity in their status as a parent, while others haven't felt especially welcomed by other moms.

But Jayne found that, after giving birth, her usual support system had disappeared. Her midwives were busy, and her husband simply didn't understand her many frustrations as a new mom. "I didn't want 'Mummy Friends,'" Jayne wrote. "Until I realised that no one else would understand me like they did."

The ones that had been there, done that. The ones that were fumbling through for the first time - just like me. The ones who had had every argument you can imagine with their husband. The ones proving you didn't need to lose yourself along the way. That you'll find a new you as you go. The ones who needed me just as much as I needed them.

Parenting is hard work, and being able to share that with moms who are going through the exact same thing can mean the world. There's a reason apps like Peanut have sprung up to connect moms with one another: mothers who have social support tend to have higher self-esteem, more confidence, and easier access to parenting information. And when it feels like one source of support has dropped off — whether that's a partner or old friends — moms can rely on other mothers to be there. They've all been in the same shoes, and their support becomes immeasurably valuable.

So in the end? "I didn't want 'Mummy Friends,'" Jayne ended her Facebook post. "I needed them." And judging by how widely shared her post was, it's clear that plenty of other moms felt the exact same way.