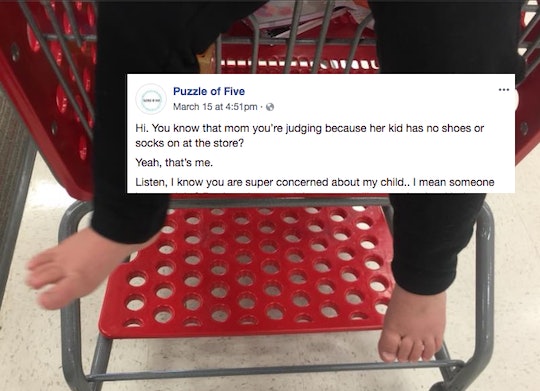 As a mom of four sons, I know a little something about the judgment of strangers when you take your kid out in public. The glares if they act up in any way, the eye rolls if you give in to their pleas (even if you're only doing it for the sake of the nosy parkers, by the way), and the comments if you aren't "doing it" right. The white hot shame of trying to parent in the face of these people is pretty awful, and this mom's viral post about people judging her kid's bare feet truly hit the nail on the head. Message to judgmental know-it-alls: moms are so over you, it's not even funny.

Ashley Moore, the mom blogger behind Puzzle of Five, has a son who isn't into wearing shoes. Or socks. Or apparently having anything touch his feet at all. Which is really not that unusual in the grand scheme of weird idiosyncrasies kids have about things when you think about it. However, it seems not everyone is a fan of her son's bare feet in public. And of course, there are plenty of people out there who are more than willing to tell this mom what they think about said bare feet.

As Moore wrote in a blog post on Facebook on Thursday, she's had enough of being judged:

Hi. You know that mom you’re judging because her kid has no shoes or socks on at the store? Yeah, that’s me. Listen, I know you are super concerned about my child.. I mean someone has to, right? But I got it covered. I see you pulling out that hard judgement card, but I’m going to need you to go ahead and stick that back into your pocket.

She continued by saying that yes, she's aware that his feet are bare, and that she knows his little feet might get cold if the weather is cold (although she also notes she gets the glares whether it's cold or warm outside). But that she is just "extremely tired of realizing a shoe is missing and retracing" her steps through Target to find it. Amen to that song, sister. I don't know if a shoe has yet been designed to properly stay on the foot of a wriggling toddler. As for socks, Moore noted that her son's socks are tucked away in his diaper bag because every time she puts them on him, he promptly takes them off because:

He hates things touching his feet, but do we blame him? Socks and shoes are just little sweaty feet prisons, screw them. And I’m in no position to pick this small battle with a 2 year old.

Moore's post about judgmental strangers went viral, with more than 33,000 shares on Facebook and fellow moms sharing stories of their own battles with the socks, while supporting Moore in standing up for herself.

Sometimes, it seems people don't have anything better to do than be critical and judgemental of something that is none of their business. as long as this child is happy, so what!

Omg I know the feeling! I’ve done this a couple of times with my daughter. She loves to take her shoes and socks off in the car.

That being said, there were plenty of judgmental moms who took to the comment section as well, unfortunately. But plenty of wise parents on Facebook defended Moore's post, with one commenter making an excellent point about simply picking your battles as a parent:

“Pick your battles”...if the child wants a blue cup instead of a red cup, why can’t they have the blue cup? Why does it have to be a battle of who’s authority when parents and children can just work together?

Why fight about something so small, indeed. At the end of the day if your kid is safe, kind, happy, and healthy... I mean, that's pretty much a win, isn't it? You'll notice shoe wearing doesn't really make the cut for high-priority needs for kids in my book.

So let yourself off the hook if you have a kid who hates shoes. And as for the judgmental strangers... don't let them get you down.