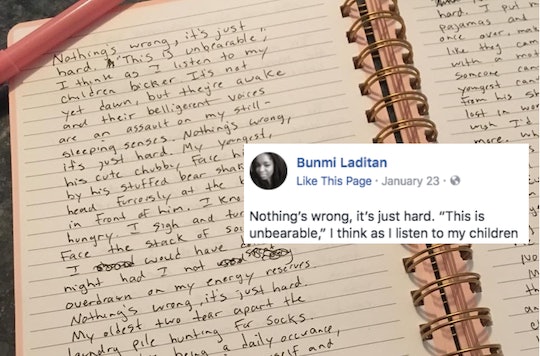 Have you ever tried to put your finger on the pulse of what it is to be a mother? Tried to explain the shape of your days now that they are shaped by someone else entirely, tried to consider the every day tasks that make up who you are now and who you are to the people who need you most? It's hard, right? Because it's complicated and joyful and monotonous and spontaneous. In other words; "nothing's wrong, it's just hard." These are the words this mom's viral post used to describe the struggles of motherhood. And she has it exactly, perfectly right.

Bunmi Laditan, the mom behind The Honest Toddler Twitter feed and writer of the brilliant book, Confessions Of A Domestic Failure, took to Facebook on Monday to write about motherhood. The struggles that seem so small but end up being weighted with invisible expectations to do better as a mother, to do more. To be more. She writes about about laundry woes and preparing school lunches, for instance, and trying to keep up with parenting "standards:"

My oldest two tear apart the laundry pile hunting for socks. Despite this being a daily occurrence, I have failed to organize myself and my home. Maybe today? Doubtful. I hurriedly pack lunches healthier than I ate as a child but somehow still not good enough by today’s standards. Is string cheese a protein? Nothing’s wrong, it’s just hard.

Laditan went on to describe what trying to get her kids out the door looks like; pulling her coat over her pajamas and giving her kids a final once-over to make "sure they look like they come from a home with a mother who cares." She then agonizes over the specific needs of each of her three children, and how she feels like she's somehow letting them down:

My oldest is lost in worries over a test I wish I’d helped her prepare more for. My middle is lost in the angst of being the middle. Note to self: give her more attention (the positive kind). My keys no longer exist in this dimension. Nothing’s wrong, it’s just hard.

It's not exactly news that moms tend to have ridiculously high expectations for themselves as parents, and are hard on themselves if they think they've failed in any ways. Those sort of parental expectations and the ever-present "mom guilt" have been linked to low self-esteem, anxiety, and depression. And still.... we persevere.

Laditan pointed out in her post that she found solace in a "warm, sweet drink" sipper behind the wheel during school drop off. And this comforting bit of wisdom:

Motherhood and life, two dishes messy enough on their own but when combined form a savoury, chunky stew: thick, and bubbling with potatoes, carrots, herbs, and chunks of tender meat in seasoned gravy. To be eaten at room temperature. With someone in your lap begging for bites, neck outstretched like the sweetest of baby birds.

Her post has been liked more than 16,000 times since it was posted on Tuesday, and moms shared their own struggles in the comment section.

"Damnit. You made me cry again. I could have written this. Except my kids have mental illness. So school doesn’t happen a lot of days. And things get broken," one reader wrote.

"Nothing is wrong but something feels wrong. I get it all done. My kids are happy, healthy, and well taken care of," another mom chimed in, adding: "I have 3 kids on my own and people always compliment me, call me super mom, say they don’t know how I do it. I must be doing something right but why does it feel like something is wrong? Nothing is wrong."

Laditan is right that nothing is wrong. Even when everything feels wrong, feels unfinished, feels less than you might have thought you would accomplish, it doesn't mean anything is wrong. It really does just mean that being a mom is hard. So try to see it for what it is, and work through your day in a way that makes sense for you. And honestly guys? Stop comparing. It really never helps, I promise you.