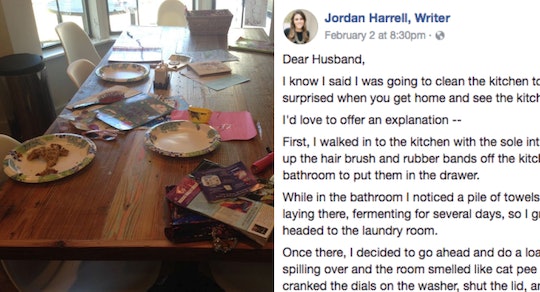 When you're a stay-at-home-mom, or even a work-from-home mom, I think people make assumptions about how your day unfolds. That, because you have sheer acres of time on your hands, your house is probably pretty clean, your laundry generally not just finished but folded and put away neatly. That fresh, wholesome meals are prepared with ease, and your children simply float along with this well-ordered lifestyle. Of course, the reality of raising kids is a totally different experience from that adorably misguided fantasy, as this mom's letter explaining why her house isn't clean manages to nail perfectly.

Jordan Harrell, a writer and a mother of three, took to Facebook on Friday to share a letter to her husband explaining why her kitchen wasn't clean. For those of you about to whip yourself into a fury over the concept that she needed to explain herself to her husband like I did; it's all good. The letter is more of a diary entry than an explanation to her husband (who Harrell notes in her post would never ask her why the kitchen wasn't clean in the first place). And the contents of this letter will probably sound achingly familiar to any mom out there who has tried to complete a task with the darling little energy-suckers that are children under foot.

In her letter, Harrell describes her fruitless effort to get that kitchen clean:

I know I said I was going to clean the kitchen today. So you might be surprised when you get home and see the kitchen is in fact, not clean.

I'd love to offer an explanation --

First, I walked in to the kitchen with the sole intention of cleaning it. I picked up the hair brush and rubber bands off the kitchen table and walked to the bathroom to put them in the drawer.

While in the bathroom I noticed a pile of towels on the floor that had been laying there, fermenting for several days, so I grabbed the towels and headed to the laundry room.

Once there, I decided to go ahead and do a load since both hampers were spilling over and the room smelled like cat pee and B.O. had a baby. I cranked the dials on the washer, shut the lid, and headed back to the original job: the kitchen.

Harrell continues to get overtaken by children; one is "hangry," another needs his cape fixed and has a meltdown when she doesn't fix it the way he wants. She remembers she was meant to email her child's teacher but gets distracted. As she so eloquently puts it, her days are filled up with "doing and never completing."

It's a familiar scenario for moms out there. A 2015 survey conducted by the Working Mother Research Institute found that moms are still taking on the majority of household chores, whether they're working outside the home or not. It gets exhausting and frustrating, particularly when you feel like nothing is really getting finished.

Harrell explains the impetus behind her letter in an email to Romper:

I shared the story to encourage any other moms (or dads) who might feel they're the only ones who can't ever get anything done. They're not. I was shocked it got the response it did, but it just goes to show we all need a little relief from the perfection we see on social media.

The response from parents who saw something of themselves in Harrell's letter has been overwhelmingly positive; it's been shared almost 7,000 times and people have taken to Facebook to leave comments like:

Love this!!!!! Makes me feel so good to know this is someone else’s norm also!😘

So here's the thing; a clean kitchen is not the gold star of parenting. Nobody is judging you for a messy kitchen, and if they are they're probably zero fun. It's letters like these that allow moms to come together and realize they're not alone. That it's OK to have a rough day.

And to just leave the messy kitchen. It's not the end of the world.